US Transportation Secretary Pete Buttigieg is joined by others to discuss the White House's infrastructure plan and its impact on metro Atlanta.

Biden is pushing for the $2 trillion package to be passed quickly in Congress. Buttigieg's goal on the trip is to highlight how Biden's plan could create millions of jobs.

"At the end of the day we'll have to see how they decide to vote, but we've absolutely had good faith conversations where there's a lot of goodwill with both parties who want to get something done," Buttigieg said.

The first stop of the tour will be at Hartsfield-Jackson Atlanta International Airport, where Buttigieg will tour the new plane train tunnel.

The transportation secretary and Georgia Sen. Jon Ossoff will also meet with minority-owned businesses that helped build the airport.

Other stops in the White House official's trip will involve an East Point walking tour to discuss infrastructure investment opportunities and a press conference with national and local Georgia officials highlighting the importance of investing in infrastructure. 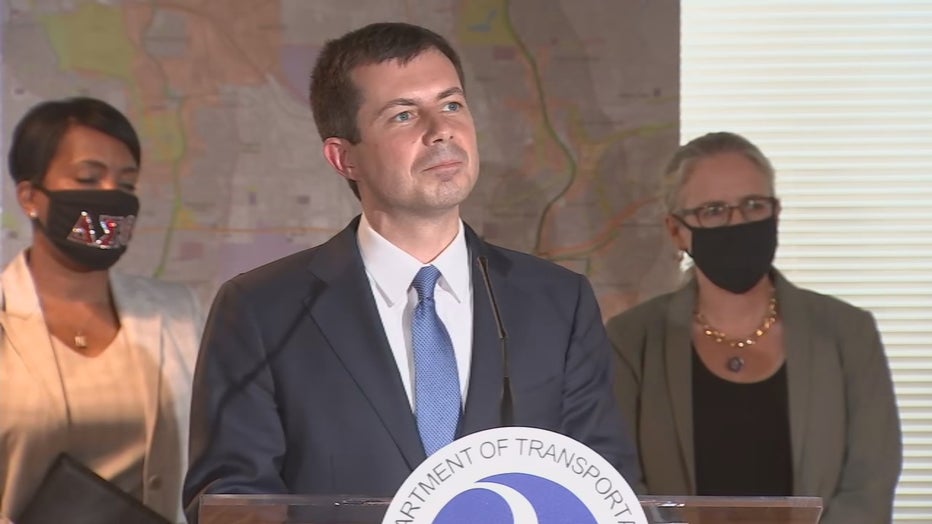 US Transportation Secretary Pete Buttigeg in Atlanta discussing the White House's new transportation plan and its impact on Georgia on May 21, 2021. (FOX 5)

"You don't need an engineering report to know that driving on American roads, they're not the way they should be," Buttigieg said. "That our bridges need work. We got 1000's upon 1000's that are in poor condition or even structurally deficient."

But Republicans have pushed against the bill with some saying the bill spends too much on projects not directly tied to infrastructure.

U.S. Transportation Secretary Pete Buttigieg is coming to Atlanta to push for the passing of Biden's new infrastructure plan. The first stop of the tour will be at Hartsfield-Jackson Atlanta International Airport, where Buttigieg will tour the new plane train tunnel.

"It's not an infrastructure bill, it's a spending bill. Only about six percent of that bill actually goes to roads and bridges," Rep. Ashley Hinson said.

The president’s team had set a soft Memorial Day deadline to determine whether a deal with Republicans was within reach.