The controversial animal rights organization calls the look “a show-stopping, conversation-starting” feature that goes “where no sweater has gone before.”

LOS ANGELES - PETA isn’t sheepish about its hatred of wool — at least not judging by its newest apparel offering, which features a "bloodied" plush sheep hanging from it.

The limited-edition item, which was designed around the popular ugly Christmas sweater trend, comes in seasonally-appropriate green with red and white designs adorning torso and sleeves. However, in a decidedly unfestive design, the words “Wool Hurts” are emblazoned on the front and a large “bruised and bloodied plush” sheep protrudes from the front and back.

The controversial animal rights organization calls the look “a show-stopping, conversation-starting” feature that goes “where no sweater has gone before” and promises to give the sweater's wearers “a chance to join in on the holiday fun while making a statement for animals at the same time.” 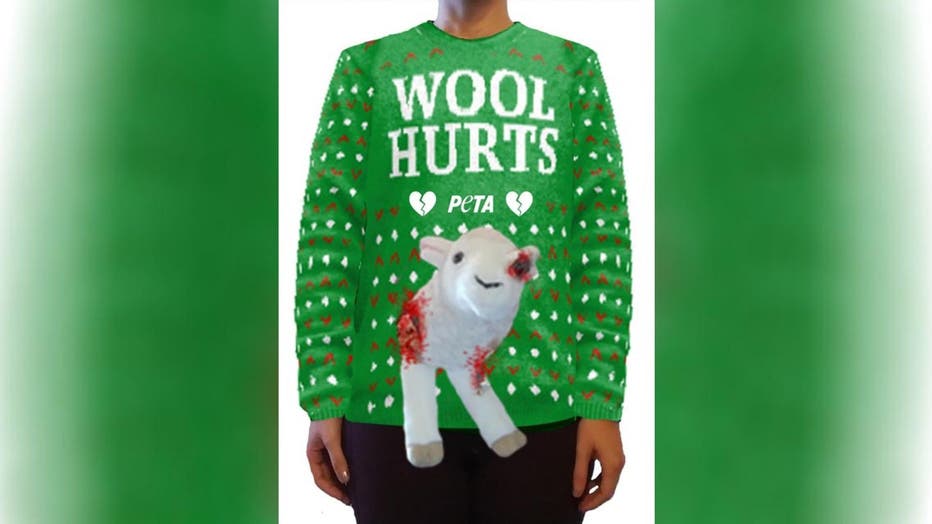 The alleged fun-time-having sweater is made of 100-percent acrylic yarn and produced in Germany. According to the PETA website, the holiday item will be shipping the week of Nov. 25 — possibly just in time for Thanksgiving.

Being edgy this Christmas does come at a price — $150 to be exact.

“It’s all part of PETA's campaign against the wool industry, raising awareness of the 'bloody truth' behind it,” the press release reads. “It comes at a particularly relevant time following recent breaking investigations where workers were caught beating, kicking, stomping on, and even killing gentle sheep, which spurred protests against retailers like Forever 21, along with celebs like Billie Eilish and Pink currently speaking out on the issue.”