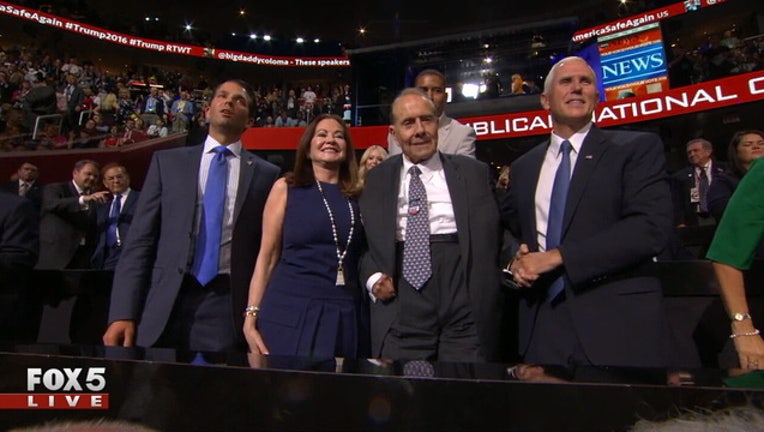 CLEVELAND (AP) — Indiana Gov. Mike Pence, making his first appearance in Cleveland since being named Donald Trump's running mate, tried to reassure Republicans nervous about the celebrity businessman's conservative credentials by vouching for his character and comparing him to Ronald Reagan.

Pence, long a conservative darling, made a surprise appearance Tuesday in front of a powerful conservative lobbying group to vow "that Donald Trump will be a great president of the United States of America because his heart beats with the heart of the American people."

"He's a builder. He's a fighter. He's a father and a patriot," Pence said of Trump in what may be a preview of his vice presidential acceptance speech at the Republican National Convention on Wednesday. "Trust me when I say this. When we come together as a party, we'll re-elect strong conservative majorities in the House and the Senate and elect this good man as the 45th president of the United States, and I know in my heart that we will make America great again."

Trump picked Pence as his running mate last week after days of unusual and very public deliberations. Those in Trump's camp who advocated for Pence framed his selection as a step toward party unity, touting his popularity among conservatives, including those who were skeptical of Trump and supported other candidates during the bruising Republican primary battle.

Pence seized the task of selling Trump to the conservatives gathered for a luncheon hosted by The American Conservative Union Foundation. He immediately compared Trump to the former president whose has been deified by many conservatives.

"The primaries are over. It's time for us to come together around this good man," Pence said.

Pence was warmly received by the audience and some in crowd said they believed the governor could act as a strong character witness for Trump, whose grandiose lifestyle, two divorces and formerly liberal policy positions left some conservatives uneasy.

"To hear Mike Pence say he is a good man, that helps those of us who still doubt that when we go in the ballot box we'll be able to vote for Trump," said Charles Meyer, a delegate from Texas. "Mike Pence's word means something."

The roster of attendees at the panels organized by the ACU — it hosts the major Conservative Political Action Conference every year — prior to Pence's arrival underscored the division Trump still faces among Republicans. One speaker, Alabama Sen. Jeff Sessions, is among Trump's closest allies. Another, Utah Sen. Mike Lee, has been a fierce Trump critic.

And not every conservative at Tuesday's gathering was sold by Pence.

"I think some people feel (Pence) has the conservative credentials that people are looking for on a ticket," said Diana Shores a delegate from Virginia. "But not me."