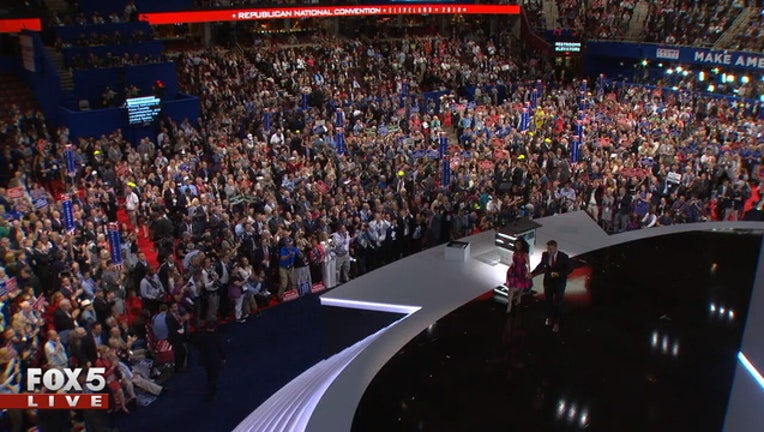 With Donald Trump officially the Republican presidential nominee, attention shifts to running mate Mike Pence Wednesday as he addresses the Republican National Convention in Cleveland. Delegates will also be watching former Trump rival Ted Cruz speak to see what he says about Trump.

In an odd twist for a prime-time convention speaker, Cruz hasn't endorsed the New York businessman, who called him "Lyin' Ted" on the campaign trail. At a rally in Cleveland, Cruz said that he and his followers had the duty "to follow our conscience."

In contrast, Pence is expected to vouch for the celebrity businessman's conservative credentials and call for unity in a Republican Party left divided after the bruising primary fight. The Indiana governor was selected by Trump last week.

Controversy over Melania Trump's Monday evening speech still hung over the convention. After it became clear that passages in Trump's wife's speech were strikingly similar to a 2008 speech from first lady Michelle Obama, a speechwriter for Donald Trump's company said Wednesday she had made a mistake and apologized.

Meredith McIver said she offered to resign but Trump refused to accept her resignation.

What to know about the third day of the GOP convention:

The Indiana governor will give a prime-time address Wednesday that will allow him to reintroduce himself to the nation after a somewhat awkward event Saturday when he was presented as Trump's running mate. Trump called Pence his "partner" but left no doubt in a rambling speech that Pence's role will be as sidekick to the billionaire businessman at the top of the ticket.

In addition to a call for unity, Pence plans to make the case that he's prepared to govern. He's expected to point to Indiana's economic growth and to accomplishments under his watch.

Cruz arrived in Cleveland with an eye on his own political future, holding the rally with hundreds of supporters who greeted him with chants of "2020" — the next presidential election.

The Texas senator was expected to continue sidestepping a formal endorsement of Trump during his convention remarks. During the primary, Cruz called the businessman a "pathological liar" and "utterly amoral."

Trump's son, Eric, will be the third of the candidate's children to address the convention.

In a statement issued by the campaign, speechwriter McIver said Mrs. Trump had told her that she admired Mrs. Obama, and had read passages from Obama's speech as an example of things she liked. McIver said she wrote down the passages and later included them in the speech.

"This was my mistake, and I feel terrible for the chaos I have caused Melania and the Trumps, as well as to Mrs. Obama. No harm was meant," McIver said.

For two days, the Trump campaign tried to brush aside any talk of plagiarism, calling the criticism absurd.

Wednesday's theme is "Make America First Again." GOP leaders say that while the United States has always been an exceptional nation, but eight years of bad policies and poor leadership under President Barack Obama have weakened America abroad and limited opportunities at home.

Republicans vow that in a Trump administration, the U.S. will reclaim its historic role in the world.

So far, many convention speakers have devoted more time to denouncing presumptive Democratic nominee Hillary Clinton than talking about Trump.

On Tuesday, New Jersey Gov. Chris Christie, a former federal prosecutor, laid out an aggressive case against Clinton as the crowd yelled "Lock her up! Lock her up!" Failed Republican presidential candidate Ben Carson went so far as to associate Clinton with Lucifer.

The Secret Service is investigating a prominent Donald Trump supporter from New Hampshire who said in a radio interview that Clinton should be "shot for treason."

Cleveland police say about a dozen people have been taken into custody and will be arrested following a chaotic protest near the arena hosting the convention.

The arrests happened as a protest group tried to burn an American flag near Quicken Loans Arena. It was the most turbulent protest since the four-day convention began Monday. The chaos prevented delegates and members of the media from getting into the Quicken Loans Arena for the evening's proceedings.

THE REST OF THE WEEK

Trump will close the four-day convention with a speech Thursday night accepting the nomination.