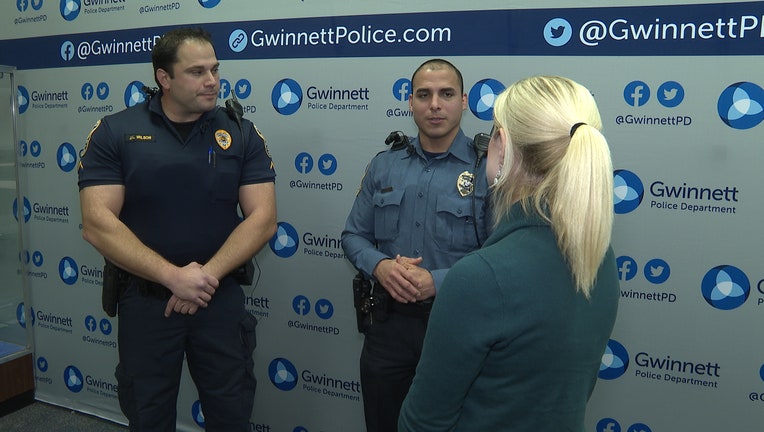 GWINNETT COUNTY, Ga. - Two Gwinnett County police officers have earned accolades from the department after going above and beyond to help a woman in need.

Officer J. Wilson and Officer B. Villacis said a concerned citizen flagged them down the morning of December 7 to check on a woman he had seen slumped over the wheel of her car along Buford Highway. The man was worried she may have been suffering a medical emergency.

The officers discovered the woman had just been sleeping, but she was initially very standoffish as they tried to talk to her. She told them she had had negative encounters with law enforcement in the past.

"I could tell that she had a lot of stuff in the car.  So, I started asking her more questions, you know.  Do you have a place to go?," Officer Wilson recalled.  "She opened up and kind of said she was homeless."

"The way she was telling her story, you could tell genuinely that she needed help, but she wasn't asking for it," explained Officer Villacis.  "You could tell she was trying to make it through."

Officers go above and beyond to help homeless woman

Two Georgia police officers went above and beyond the call of duty, using their own money to help a homeless woman in need.

That was when Officer Wilson offered to fill up the woman's gas tank and get her a hotel room for the night.

"I don't have much," Wilson was captured saying in footage from his bodyworn camera. "I mean, I'm a police officer, so I don't make much money, but I'll try to do what I can for you, okay?"

The officers did not tell anyone about their interaction with the woman.  It was not until weeks later when a supervisor was reviewing their body camera footage that it came to light.

"It's part of my job," said Wilson. "Policing is just not all about enforcing the laws. It's about serving the community as well."

Officer Villacis said he hopes the woman's experience will change her perception of law enforcement officers and people in general.