Braves fan flocked to the Battery outside of Truist Park on Tuesday to watch Game Three of the NL Championship Series against the Dodgers. Despite the last-minute rally by LA, Braves fans remain hopeful as the Braves are 2-1 in the series.

LOS ANGELES - Despite a strong showing from the Braves through eight innings of baseball, the Dodgers rallied back late to beat the Braves 6-5 and cutting the Braves’ lead in the NL Championship Series to 2-1.

The Dodgers got on the board first thanks to a Corey Seager bomb. The Braves were able to leave the inning with the bases loaded and only a 2-0 deficit.

The Braves were able to open things up in the top of the fourth with RBI singles by Joc Pederson, Adam Duvall, and Dansby Swanson.

No response by the Dodgers in the bottom of the fourth.

Top of the fifth, the Braves extend their lead 5-2 after another RBI single by Duvall. 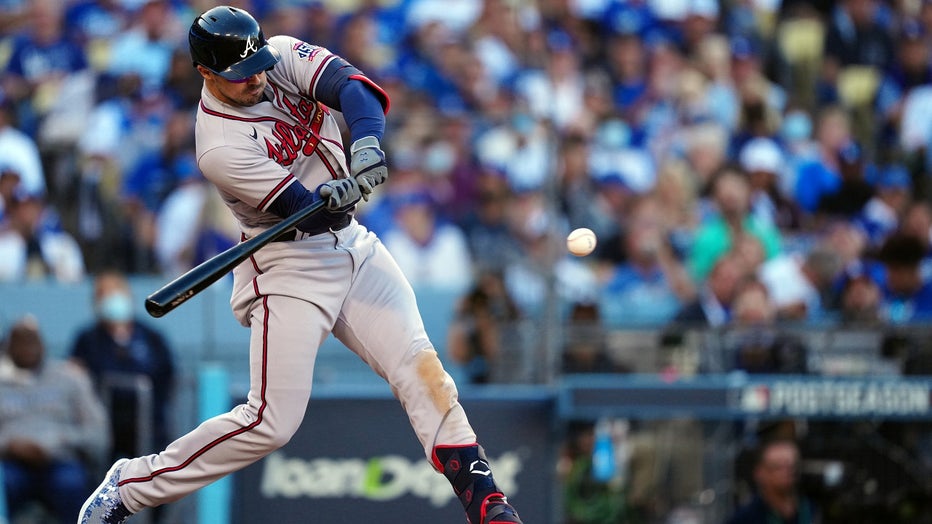 The Braves built their lead with a bunch of singles, pounding out 12 hits. Freddie Freeman broke out of his slump, going 3 for 4 with a walk and a run scored after he struck out seven times in eight at-bats in the first two games.

The Dodgers were down to their final five outs when Bellinger drove a two-strike pitch from Luke Jackson into the right-field pavilion, igniting the blue towel-waving crowd, some of whom had already left with LA trailing 5-2.

Chris Taylor singled, stole second and moved to third on pinch-hitter Matt Beaty’s groundout. Betts followed with a double off Jesse Chavez to the right-center.

The Braves could not come up with a hit in the top of the ninth giving the game to the Dodgers.

The Braves haven’t won at Dodger Stadium since June 8, 2018. The Braves have their next chance to do just that at 8 p.m. Wednesday.

LHP Julio Urías starts for the Dodgers in Game 4 on Wednesday. The Braves were planning a bullpen game.