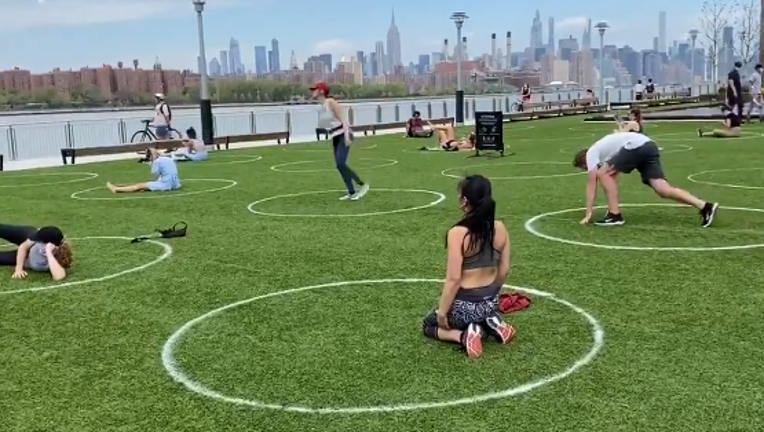 As temperatures soared into the 80s on Friday, New Yorkers flocked to parks to soak up some sun after months of lockdown.

Brooklynites arrived at Domino Park to find large circles drawn on the grass.

“They’ve made little round human parking spots in Domino Park in Brooklyn!” one tweet said, showing video of the park.

The circles appeared to be six feet apart, according to The Sun. People could be seen exercising inside the circles or sitting on blankets and lawn chairs. Most people appeared to largely adhere to the barriers, though, there were some who ignored the suggestion entirely.

The Mayor’s Office made a public statement to inform the public that they will be increasing patrols in certain parks to enforce social distancing and limit crowds, where necessary.

“We will be monitoring and limiting crowd sizes in specific parks this weekend to ensure safety: Sheep Meadow in Central Park, Hudson River Park, Piers 45 and 46, Domino Park in Williamsburg. Please wear a face covering and practice social distancing,” the notice on Twitter read.

Earlier this month, officers in N95 masks patrolled Sheep Meadow, pointing out signs around the field that read “KEEP THIS FAR APART” over a six-foot arrow, according to the New York Post.

Some compared the practice with “Stop and Frisk.”

“This is the farthest thing from that. This is addressing a pandemic,” de Blasio argued during a press conference last week.

“This is addressing the fact that lives are in danger all the time. By definition, our police department needs to be a part of that because safety is what they do.”