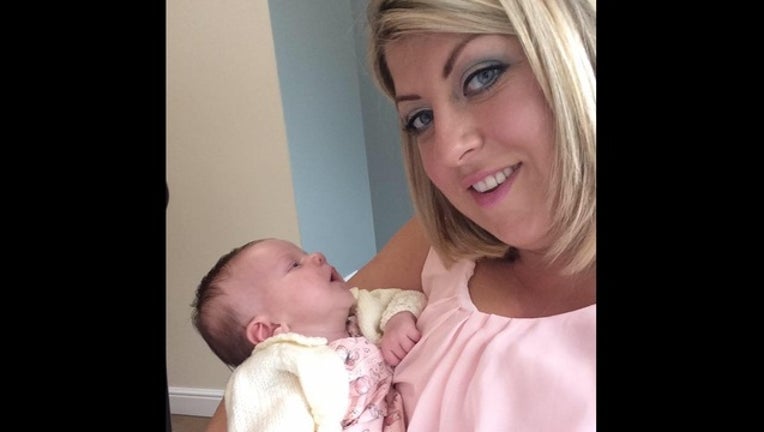 Credit: Claire Henderson/Facebook -- Henderson posted this photo as the profile picture of her Facebook page. It shows her cradling baby Brooke.

(WTXF) - A mother from the United Kingdom is sending a warning to others after she says a kiss from a visitor could have killed her newborn baby.

Brooke, Claire Henderson’s daughter, was born about a month ago, according to Buzzfeed, and her arrival drew many visitors.

Henderson spoke to Buzzfeed News and said that one of the visitors carried the herpes simplex virus 1 (HSV-1), which causes cold sores. It can be transmitted through oral-to-oral contact.

According to Henderson, the visitor did not have any visible cold sore when she held Brooke.

However, the World Health Organization says that HSV-1 can be transmitted through saliva and inside mouth surfaces as well as outside.

One night, while feeding Brooke, Henderson says she noticed her baby had swollen lips and a cold sore.

Henderson rushed her to the hospital, knowing the risks.

“My friend had shared an article with me on Facebook when I was four months pregnant on the dangers of cold sores in babies,” she said to Buzzfeed.

When they arrived at the hospital, doctors affirmed Henderson’s haste, saying she was correct in taking the baby’s condition seriously.

Baby Brooke had sores in the back of her throat and on her lips. She was then tested for brain or liver damage.

“If she had been left it could have easily spread and — worst case — been fatal,” Henderson said.

According to Dr. Bonnie Maldonado, a professor of pediatric infectious diseases at Stanford University, cases like Brooke’s are rare, but very serious.

Maldonado told Buzzfeed that should a baby get a cold sore in their first month after birth, it can lead to “severe neurological disease” or death.

However, she also said that most babies are not at risk because of the antibodies they get from their mothers.

“It’s one of these diseases that we are really vigilant for, but it’s so rare,” she said.

Both HSV-1 and HSV-2 (the virus that can cause genital herpes) are also able to be transmitted from mother to baby during childbirth.

Buzzfeed reports that Brooke was placed on an anti-viral drip for five days. She is now doing well.

Henderson took to Facebook to warn other mothers of the dangers.