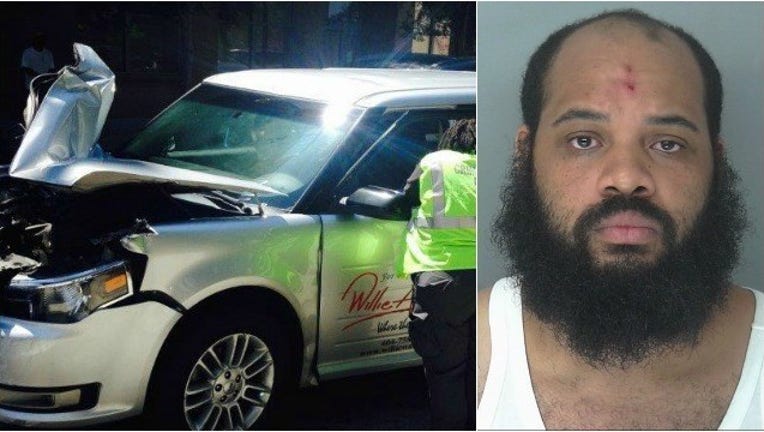 Funeral Director Willie Watkins is still stunned by the carjacking that left one of the vehicles in his fleet wrecked and 34 year old Henry Lyles behind bars.

Atlanta Police Investigators tell FOX 5 that Lyles crashed an SUV through a gate near the morgue at Grady Memorial Hospital Sunday morning. Officers said hospital workers had just loaded the body of a patient who died there into that vehicle.

"It's got to be a deranged person who would do something like that knowing a body was in there," Watkins said Monday in front of his funeral home on Ralph D. Abernathy Boulevard in southwest Atlanta.

Watkins questions where hospital security guards were when Lyles confronted his employee Sunday morning. He says the carjacker came from inside the morgue area and even pretended he would help load the body. Instead, Lyles allegedly snatched the keys and shoved the employee to the ground before making his getaway.

"If he had seen a security guard when he was walking through, maybe this would not have happened," Watkins told FOX 5's Portia Bruner.

The spokeswoman for Grady Memorial Hospital calls this an "unusual set of circumstances," but insists proper security protocol was followed.

Denise Simpson says Lyles was a patient who was undergoing treatment in the trauma center for a injuries from a single car crash. Simpson says Lyles walked away from the trauma center and security guards had been alerted and were looking for him. But by the time they spotted Lyles, investigators say he was already speeding away in the funeral car with the body inside.

"It just shows even the dead can't rest in peace. Anything can happen in this day and time," claimed Watkins.

Atlanta Police say Lyles ditched the Ford Flex on Auburn Avenue and Piedmont Rd and stole a another Ford SUV from a different man. Lyles is charged with carjacking and theft by taking.

"The Grady security team is reviewing the incident to determine if additional security measures are needed," Simpson said in a statement issued to FOX 5 on June 29.