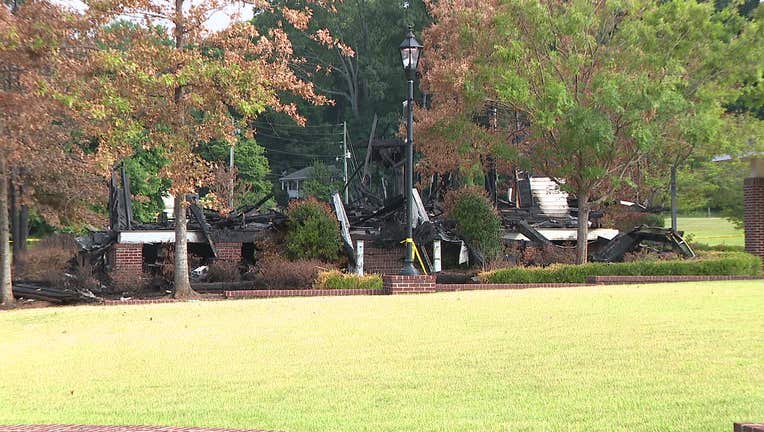 MORROW, Ga. - It could have been a solemn scene on Saturday in Morrow's downtown entertainment area — known as "The District" — where city officials and residents gathered to discuss plans to move forward after suspected arsonists caused catastrophic damage to three historic buildings.

Instead, there was a feeling of optimism. Mayor John Lampl said Saturday's unity breakfast was to celebrate the community coming together under tragic circumstances.

"Morrow is still in the game, we're open for business," the mayor said. "It's a tragedy. We will rebuild in some format and move forward."

Several new businesses still plan to move into the revitalized area, which is also the future site of concerts and other events next to South Lake Mall. Lampl said there are plans for a $65 million public arena in the area.

A 15-year-old boy and two 14-year-old boys were taken into custody in Clayton County. All three were charged with arson, burglary, criminal interference with government property, criminal damage to property, and criminal trespass.

The fire happened in the evening on June 3.

A Morrow Fire Department spokesperson said details at the scene indicated the cause of the fires may have been arson. Investigators believe the speed and intensity of the fire pointed to fires being set intentionally.

What is ‘The District’ in Morrow?

The District is a cluster of historic homes in downtown Morrow.

The area between Southlake Mall and Interstate 75 was previously known as Olde Towne Morrow. The city transported homes that dated back to the 1800s into the area. One structure, the Napier-Small house, was built in 1846 and listed on the National Register of Historic Places.

Businesses moved from the area, and it fell into disrepair. Since the city has redeveloped the area and brought some events to the area in an effort to revitalize it.

Now, a handful of businesses are planning to move into the area. The fires created a setback in filling the long-vacant spaces, but the first few tenants could still move into undamaged buildings in a few weeks.