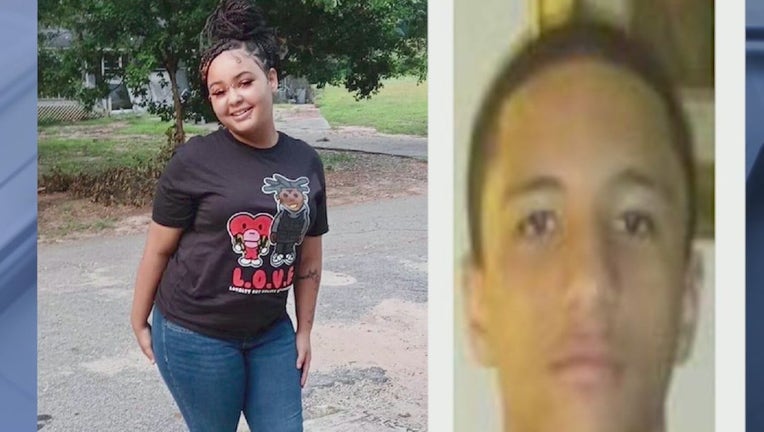 (Left) Alasia Vaughn, 15, and (Right) John Sharpe, 16, were reported as missing after both had not been seen on heard from beginning on December 24, 2021.

NEWTON COUNTY, Ga. - The two teens, one from Butts County, the other from Newton County, who had been missing since Christmas Eve have been located, the Newton County Sheriff's Office announced Saturday.

Fifteen-year-old Alasia Vaughn and 16-year-old John Sharpe had last been seen on December 24, 2021, near a Butts County Dollar General, according to Alasia's mother.

The Vaughns are from Covington, but Ann says Alasia went to visit her grandmother's house in Butts County just before the holiday.

John also disappeared on Christmas Eve. Alasia's mother, Ann Vaughn, said she did not believe the disappearance was a case of two teenagers running away together.

"Something doesn't feel right. She would've asked to use a restaurant's phone, she would've called me or her sister," she said after returning home from a search party in Henry County earlier this month.

MISSING TEENS FROM BUTTS, NEWTON COUNTIES BELIEVED TO BE TOGETHER

Both Butts and Newton County sheriff's office previously posted about the teen disappearances.

Two teens missing may be together, deputies say

Two teens, one from Butts County, the other from Newton County, missing since Christmas Eve are believed to be together.

Alasia is described by deputies as being 5-feet-5-inches tall, weighing about 190 pounds. She had last seen with her hair in a ponytail, wearing a red jacket with a hood.

John is described by investigators as being 5-feet-8-inches tall, weighing about 140 pounds. Authorities say it's not clear what he was wearing when he left his home on Green Commons Drive.