MARIETTA, Ga. - It was a life-changing experience. A man, high on drugs, running from the law and a cop on a mission to help. He arrested the man, and the words he said helped him turn his life around.

Justin Jackson, 31, said he had been using drugs since he was a teen.

From there, Jackson said his life spiraled out of control. He was in and out of jail. One night, in 2015, he was arrested again. This time by Marietta Police Officer Sean Rohan. This time it was different.

"It was a compassionate and caring approach versus a tackle and Tazing approach which was what I was used to at the time," said Jackson.

"I said 'Hey man, come here for a second, let's talk.' I could tell he looked rough. He'd been through a lot," said Officer Rohan, who is now a detective with the department.

A couple of weeks earlier, Rohan had lost his older brother to addiction. The pain and loss were still fresh. He related that to Jackson.

"These are the consequences, this is what could happen if you don't make a change in your life," said Rohan.

It was those words that Jackson took to heart. From that day forward, his life changed.

He now manages The Zone, a recovery center in Marietta.

Jackson never knew the name of the officer who arrested him. He said he always wanted to meet the man behind the badge who helped him.

Friday, the two met each other for the first time since that night more than three years ago.

"It's a moment, a unique blessing for me that I can put the person to that event," said Jackson.

"It's great to hear what he's done and the recovery he's made, and the people he helps now in the position he's in," said Rohan. 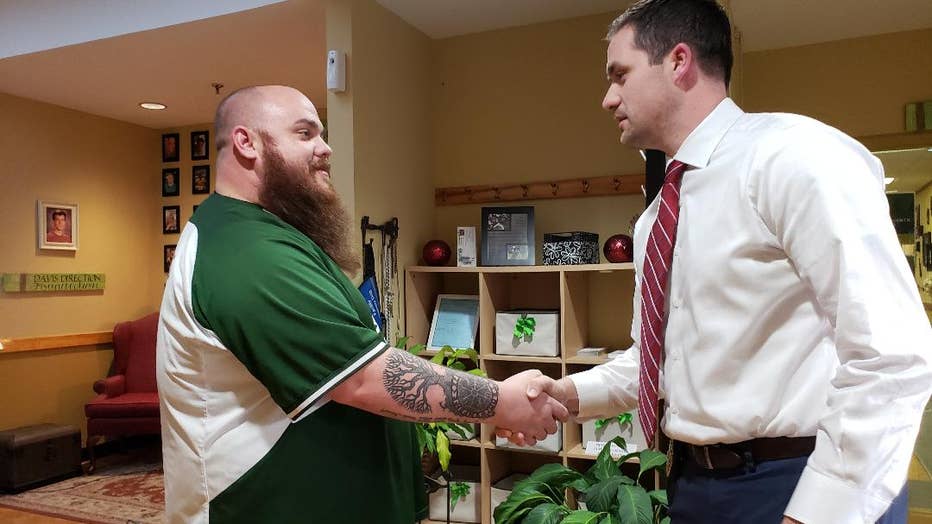