Man rides through Chicago on horseback to spread positivity

Adam Hollingsworth, who calls himself the “Dreadhead Cowboy,” wanted to keep the peace amid a weekend of violence in the Windy City.

CHICAGO - As widespread protests and looting were reported in Chicago over the weekend following the Minneapolis police killing of George Floyd, one man trotted throughout the city on horseback in an effort to spread a little positivity.

Adam Hollingsworth, who calls himself the “Dreadhead Cowboy,” decided to ride one of his horses through the streets on May 30 to try and “keep the peace.”

Chicago is one of many U.S. cities that has experienced days of protests, some of which have turned violent, in the wake of Floyd’s death. Looting was reported, hundreds were arrested and a curfew was implemented in Chicago’s most violent weekend of the year. The Illinois National Guard was also called in to protect the downtown area.

Hollingsworth, 33, shared video of himself riding his horse, named Bella, while stopping to speak with people in the street. Many in the video are eager to pet the 13-year-old quarter horse or take photos with the animal. 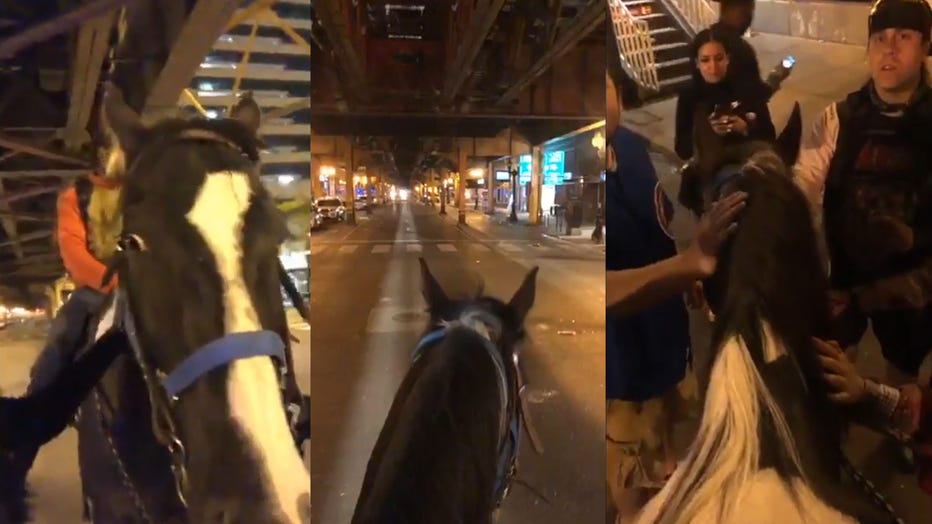 Adam Hollingsworth, nicknamed "Dreadhead Cowboy," rode on one of his horses through the streets of Chicago amid widespread protests over the police killing of George Floyd on May 30, 2020. (Photo credit: Dreadheadcowboy Ai via Storyful)

“People out here are rioting for the wrong reason. They want to break into stores. They want to destroy s---,” Hollingsworth says in the video. “The only thing they’re doing is hurting our city.”

In the video, Hollingsworth passes by businesses with shattered windows. At one point, law enforcement officers ask the man if he’s with the National Guard. Some people later question if he stole the horse from police during the protests.

RELATED: Volunteers across the US gather to clean up debris, trash and graffiti after protests

But Hollingsworth, who owns five horses that live in a Chicago suburb, has become well-known through Chicago’s South and West Side neighborhoods, according to local news reports. Videos of the Dreadhead Cowboy riding through city neighborhoods have apparently gone viral in recent weeks, and Hollingsworth created a GoFundMe campaign in an effort to continue bringing his horses to under-served communities.

The Chicago native said he “fell in love” with the animals when he saw his first horse in person four years ago, and learning how to ride gave him a sense of pride, according to the GoFundMe campaign. He hopes to teach Chicago kids how to ride and care for a horse.

“I thought about all the kids in the inner city of Chicago that have never seen a live horse before. I knew this would be something different and exciting for them,” Hollingsworth wrote in the GoFundMe.