The COVID-19 pandemic put a lot of people in financial turmoil. One organization is standing up for anyone still struggling to pay rent. The group gathered outside the Fulton County Courthouse to call for rent cancellation and to reinstate the eviction ban. Their demands come less than 24-hours after the US Supreme Court ruled the Atlanta-based CDC couldn't legally reinstate its ban on evictions.

"The only way out of this crisis is to cancel the rent and keep people in their homes. There is a pandemic going on. We can't be having people put out on the street," said Estevan Hernandez, Cancel the Rent organizer.

Thursday evening, the US Supreme Court ruled the CDC was not authorized under federal law to reinstate the ban on evictions. The agency reinstated the ban on August 3.

According to the Court, the eviction moratorium can only continue with congressional authorization.

Groups, including the Georgia Association of Realtors, filed a lawsuit challenging the CDC eviction moratorium.

The association sent this statement:

"The Georgia Association of REALTORS is pleased to see the Supreme Court of the United States render a decision that is both fair and aligned with the principle of private property rights in America. 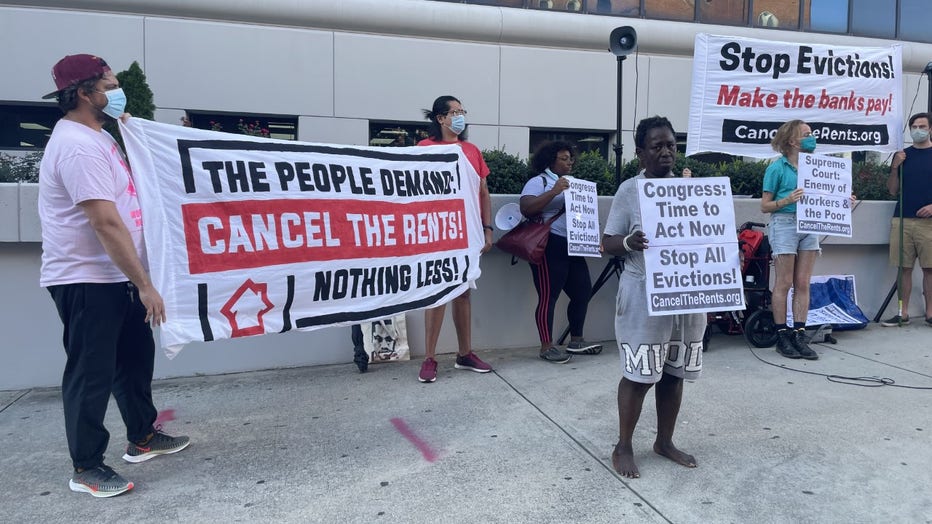 Nearly half of all rental housing in America is provided by mom-and-pop housing providers. These landlords have shouldered the burden of the financial hardship caused by the lack of rental income for a year and a half. The end of this unlawful policy marks the beginning of the return of the housing market to a healthy state.

No housing provider wants to evict a tenant – that scenario is a last resort option reserved for rare cases. The availability of nearly $50 billion in rental assistance funds to cover back rent and utilities for struggling tenants should halt the need for the vast majority of imminent evictions.

We appreciate the Administration’s new guidance that seeks to speed up the distribution of funds, which includes many recommendations from the REALTOR® organization. We will continue to promote these avenues for assistance and will encourage our 48,000 members to do the same. "

According to Census Bureau data from earlier this month, roughly 3.5 million people in the US said they were facing eviction in the next two months.

It's a reality Darryl Wilkins knows far too well.

Wilkins watched from across the street from the Cancel Rent Campaign, shouting in agreement.

He said help would make all the difference.

"It would get me out of here. It would lift me up to a point where I feel like a human, a man again," Wilkins said. :

The Biden administration said it was disappointed by the Supreme Court's ruling. President Biden is calling local and state governments, and landlords to prevent evictions.