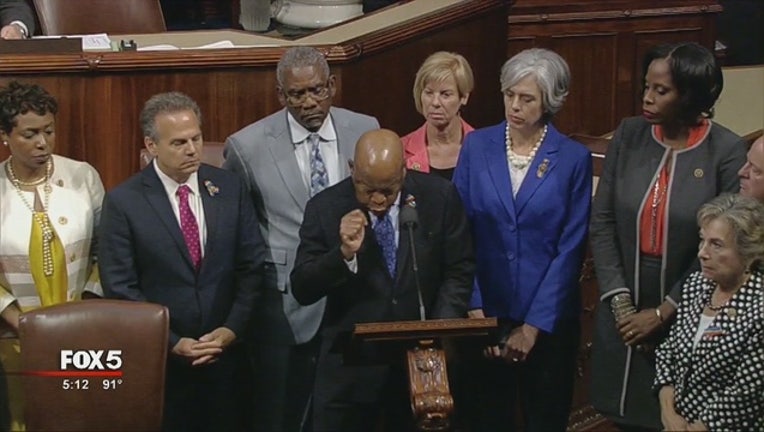 WASHINGTON (AP) — Rep. John Lewis, who shed blood in Selma for civil rights, sat shoulder to shoulder with fellow Democrats on the House floor as the leader of an extraordinary protest demanding votes on gun control.

Instead of grainy black-and-white photos, color selfies with colleagues went out on social media and Periscope transmitted live video images around the world. Instead of Alabama State Troopers, the Democratic minority spoke out. And after more than 25½ hour of speeches, shouts and disruptions by dozens of Democrats, the sit-in ended Thursday with words from Lewis, his colleagues packed closed around him.

Speaking in alternately hushed and booming tones, Lewis told them that the fight over gun control is not over despite the Democrats' failure to even get a vote from the Republican-led House.

"It is a struggle, but we are going to win this struggle," the Georgia congressman said forcefully, vowing to return to the fight next month when Congress returns.

It was a long way from the Edmund Pettus Bridge in Selma, Alabama.

In 1965, Lewis crossed that bridge with Martin Luther King, Jr., and was beaten and gassed by police. The violent images stirred outrage that helped President Lyndon Johnson push the Voting Rights Act through Congress.

Words and sounds echoed across decades to today's protest, a '60s-style sit-in on the carpeted House chamber. This one was driven by the Orlando shooting this month that killed 49 in a gay nightclub, and other shootings.

The Democrats sang the civil rights anthem, "We Shall Overcome," while Republicans tried to outmaneuver them with dead-of-night votes on the floor. Lewis and a handful of other House Democrats planned the protest over the last several days, recognizing that it had to be dramatic.

"Thank you for getting in trouble! Good trouble," Lewis, 76, told his colleagues Wednesday evening, giving one of several rousing speeches as lawmakers settled in for the night. He applauded their efforts to "protest what is right."

"We have turned a deaf ear to the blood of innocents," he said of gun violence. "We are blind to a crisis. Where is our courage?"

Republicans, led by House Speaker Paul Ryan, R-Wis., decried the protest as a publicity stunt, arguing that the legislation would infringe on the constitutional right to bear arms.

Ryan waved copies of Democratic fundraising appeals based on the protest. Some said "Stand with John Lewis."

"If this is not a political stunt, they why are they trying to raise money off of it?" he asked on Thursday.

Democrats recalled Lewis's historic walk as they vowed to keep pressing the issue.

"I think this may be a Selma-like moment relating to gun violence in the United States of America," said Michigan Rep. Sander Levin.

Illinois Rep. Jan Schakowsky, who was once arrested along with Lewis and other Democrats at a protest over immigration, said people understand the role Lewis played in the civil rights movement, and that he won.

"I think there's a feeling when John Lewis takes on a cause that he isn't going to give up until we win," she said.

Introducing Lewis for that final speech Thursday, South Carolina Rep. Jim Clyburn spoke emotionally about his friend of almost six decades. He said of anyone who would call his protest a political stunt: "They don't know John Lewis."

Lewis was first elected to his Atlanta-based district in 1986. Overall, his tenure has been less marked by leadership on legislation and more as an inspirational member of the Democratic caucus. He's not as spry as he was in the 1960s. When he needed to get up from the House floor from time to time, several colleagues had to help.

But he's embraced the times. His office tweeted lines from his speeches throughout the protest, including the hashtag #NoBillNoBreak. According to Twitter, that hashtag and #HoldTheFloor have been tweeted more than 1.4 million times.

In a tweet Thursday morning, Lewis said "I still feel young at heart."

The response has been diverse — from Myrlie Evers, widow of slain civil rights activist Medger Evers, who sent out a blog post supporting Lewis, to reality television star Kim Kardashian West, who tweeted a photo of the congressman in solidarity with the House Democrats.

President Barack Obama weighed in on Twitter as well.

"Thank you John Lewis for leading on gun violence where we need it most," he said.