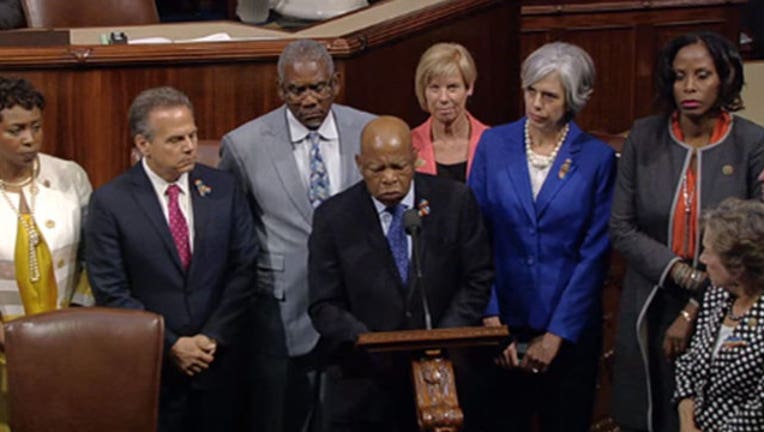 WASHINGTON (AP) — Bernard Lafayette was all smiles as he watched his civil rights comrade John Lewis commandeer the floor of the U.S. House for an old-fashioned, marathon sit-in over gun legislation.

Lafayette goes back with Lewis to the student sit-in protests in Nashville, Tennessee, to the early days of the Student Nonviolent Coordinating Committee, and the Freedom Rides, more than a half-century ago. Now 75 and a professor at Emory University in Atlanta, Lafayette said he was tickled but not surprised that Lewis, 76, abruptly pulled this page out of the civil rights protest playbook so many years after their student activist days — and after quietly representing an Atlanta district in Congress for nearly 30 years.

"To see him after these many years still sitting-in ... that's sort of engrained in him, that confidence that direct action can bring about some changes," Lafayette said.

Long heralded as the moral conscience of Congress, Lewis did not play by the rules when he rallied fellow Democrats and staged a 25-hour sit-in on the House floor Wednesday and Thursday. There was something about the need to persuade GOP lawmakers to act on gun control legislation that struck Lewis' soul, leading him to launch a rebellion hardly seen in Congress, drawing inspiration from his hero, Martin Luther King Jr.

"He taught me the way of peace, the way of love," Lewis said Thursday during a rally outside the Capitol, where he led the crowd in singing "We Shall Overcome" and vowed to stage another sit-in when Congress returns from recess. Democrats say Congress must act to stem gun violence in America in the wake of the mass shootings at an Orlando gay nightclub that killed 49 people and injured another 53.

For Lewis' student-movement cohorts, the strategy was both natural and nostalgic.

"I don't think anything like this has happened, ever," said Eleanor Holmes Norton, also a SNCC organizer as a college student, and now a Democrat who been a non-voting delegate representing the District of Columbia in Congress since 1991. "We are in an era of direct action, but no one expects that members of Congress would have to do this. This is the kind of thing our constituents do to get our attention."

Shirley Sherrod, a SNCC organizer who worked on behalf of black farmers in south Georgia, pointed out that Lewis' direct action spoke more to the nation's desire for its elected leaders to do something about the deadly mass shootings that keep happening.

"It wasn't just about what was happening on the (House) floor," Sherrod said, noting that people quickly gathered outside the Capitol as the protest wore on. "It brings the rest of the nation into the struggle. When you're dealing with situations where people don't seem to care and don't want to listen, you have to use what you have."

And that refusal to listen, Lafayette explained, is what makes nonviolent direct protest necessary. He drew parallels between the congressional stalemate over guns and the climate from the mid-1950s into the 1960s, when blacks fighting for equality felt they couldn't get the attention of their government or the public.

"The purpose is to get people to sit down and talk with you," Lafayette said. "Otherwise, they don't respect you or think that you have any power."

"I did not anticipate coming to Congress to sit literally on the House floor, but that's what it took to raise this issue up," Norton said. "The opponent in this case, my Republican colleagues, appear just as intransigent as our opponents in the days of segregation."

Norton said she got word of the possible protest Wednesday morning. Before long, Lewis and roughly a dozen Democrats had taken the floor, disrupting legislative business with demands for a vote on a proposed gun bill, and refusing to leave.

"We have turned a deaf ear to the blood of innocents," Lewis exhorted at one point. "We are blind to a crisis. Where is our courage?"

News outlets and social media quickly began buzzing about the events unfolding on the House floor — the exact response needed to tug at the public's conscience and elicit change, Lafayette said.

"This is a way of showing to them the urgency of the situation. This is the way we brought about major change in the past," Lafayette said.

And as any civil rights veteran knows from experience, the fight is only beginning.

"It's not a quick thing," said Sherrod. "But it helps to highlight the problems in a way that they haven't been highlighted before. It would be no less than I expected from people like John Lewis."

"He is just known for this kind of activity," Norton said. "He was willing to take the blows that come with being on the front line. John Lewis was beat up badly. Because of his nonviolent discipline, he was willing to somehow take that and not retaliate. He's quite an amazing disciple of Martin Luther King Jr."