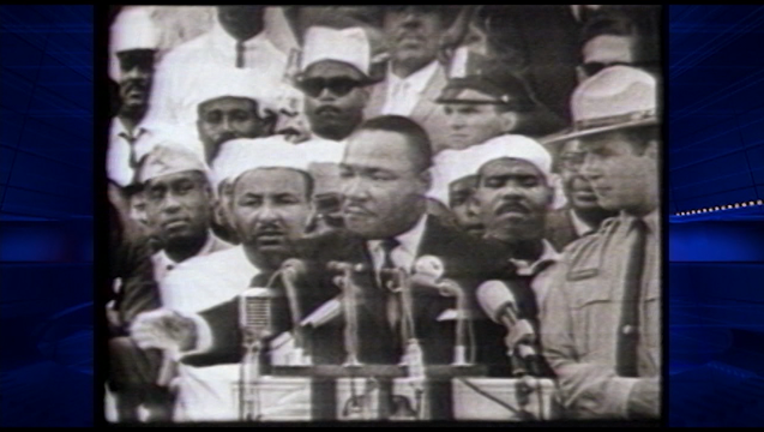 MONTGOMERY, Ala. (AP) - Humbly made and simply carved, a single wooden pulpit sits in the basement of Dexter Avenue King Memorial Baptist Church in Montgomery.

It stands alone now, yet, more than 50 years ago it gleamed in the spotlight as the eyes of the world looked upon a 36-year-old preacher's son from Atlanta, Ga. standing behind it proclaiming loudly to a crowd of thousands, "How long? Not Long."

Reverend Martin Luther King Jr., who was celebrated around the world Monday, rested his hands upon it as he stood in front of the steps of the State Capitol in Montgomery in 1965 and gave that impassioned speech to brave men, women and children. They had just successfully completed the Selma-to-Montgomery March for voting rights and equal justice for African Americans.

The pulpit King used to address the marchers can still be viewed by guests and visitors at Dexter Avenue King Memorial Baptist Church during daily open tours of the church.

Alabama Governor George Wallace at the time would not allow King to stand on the capitol steps so marchers loaded the pulpit onto a trailer bed and placed it on the street in front of the steps where King delivered his speech on March 25, 1965 said Wanda Battle, the tour director at Dexter Avenue King Memorial Baptist Church.

"During the 50th anniversary in 2015, King's daughter, Bernice king delivered her father's speech from the capitol steps from behind the same lectern and up on the conclusion Governor George Wallace's daughter, Peggy Sue Wallace and Bernice embraced," Battle said.

"It was a moment of healing."

The pulpit also starred in the movie Selma, the commemorative movie of the Selma-to-Montgomery Voting Rights March that was filmed in part in Montgomery.

Before King became the pastor there in September 1954, when he was only 25-years old, the pulpit was used as a Sunday school lectern at the church. It was also used by King for the first meeting to launch the Montgomery Bus Boycott in the basement of the church on Dec. 2, 1955, the day after Rosa Parks was arrested.

His original wooden desk, where he sat and wrote many of his sermons and speeches sits in the center with his doctoral books on a shelf behind it and a copy of one of his first financial reports for the church from 1959 sits where it can be viewed.

The church remains very much the same when King was pastor. Some of the stained glass windows, pews and chairs in the church today were there when King preached to his congregations in the church's sanctuary on the second floor.

Black and white framed photos line that wall showing a young King and his family while others depict him baptizing a young man and standing in front of the steps of the church with a large group of children attending Vacation Bible School.

Stepping inside the basement of the Dexter Avenue church from the street level, one doesn't see the pulpit of King's office first. What grabs their full attention is a 10-feet-by-47-feet long mural.

Bursting in flaming red and cool blue tones, the mural painted by church member John Feagin, 87, depicts the timeline of King's life from the start of the Montgomery Bus Boycott and Parks' arrest when she refused to give up her bus seat to a white man through his life and death as a martyr on April 4, 1968.

"I was encouraged to think about painting a mural to commemorate some of the things that King had done," Feagin said after a Wednesday afternoon service at the church. "I researched and put the mural together.

"I wanted it to be a lasting testament of King's dedication and love."

Feagin was a member of the church when King was there as a pastor and he was very impressed with the young man. At the time, Feagin was a student at Alabama State University and many of the school's professors including its president attending Dexter Avenue Baptist Church. Feagin followed.

"I knew he was a genuine person and he inspired us all. We were all fascinated with him being such a young man, but who was so knowledgeable of the Bible," Feagin said. "He was a person who not only loved and protected his membership, but also went out in the community and associated with people outside the church to spread his love around."