On Wednesday, the Georgia Bureau of Investigation reported Dequan Cortez Glenn, 24 of Atlanta, was the victim in the shooting, who police pursued and cornered. Preliminary autopsy findings are that Glenn’s fatal injury was from a self-inflicted gunshot.

Investigators said Austell PD K-9 Jerry Lee was shot once in the front leg while tracking the man. Jerry Lee was released from BluePearl Pet Hospital in Sandy Springs on Tuesday and is expected to make a full recovery.

No other officers were injured during the incident.

Investigators said at approximately 2:07 a.m. on Sunday morning, Douglasville Police Department officers were conducting a driver’s license and safety checkpoint on Chapel Hill Road near the Interstate 20 exit, the Georgia Bureau of Investigation said. While at the checkpoint, officers saw a vehicle attempting to avoid law enforcement, according to investigators. Officials said officers began to pursue the vehicle, but it stopped and the male driver ran.

Officers pursued an unidentified suspect on foot on I-20 eastbound behind a Lowes. 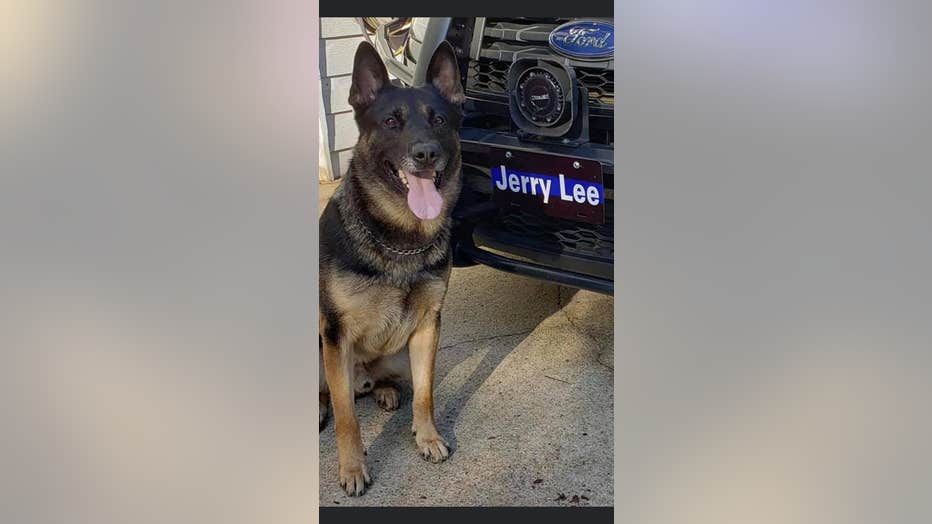 During the night Jerry Lee was assisting on a track for a neighboring agency and was shot by the suspect. (Photo: Austell PD)

At 5:08 a.m., the suspect was located by GSP Aviation in the woods near the 6800 block of Douglas Boulevard. Douglas County Sheriff's Office SWAT team members attempted to talk to the man. Officials said law enforcement set up a perimeter when a single gunshot came from the woods.

Police found the suspect behind a Hooters and provided medical attention and took the man to Wellstar Douglas Hospital before he died. GBI investigators found a handgun near his body. The GBI Medical Examiner’s Office will perform an autopsy.

Officials said the Georgia Bureau of Investigation will conduct an independent investigation.