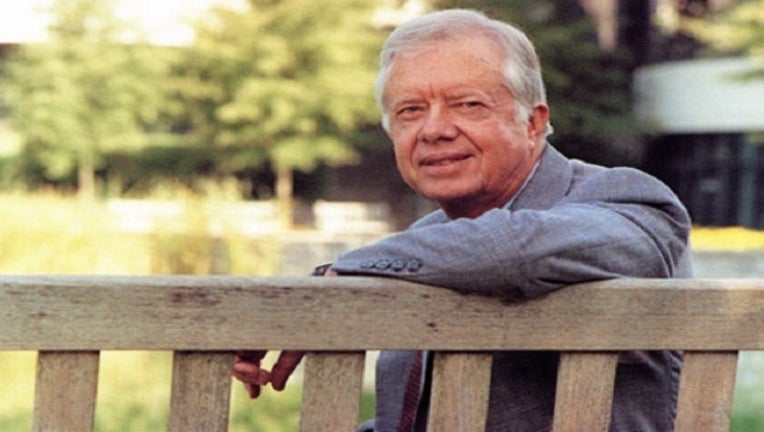 ATLANTA (AP) — Put two former presidents in a room, and the conversation is bound to turn to politics. Even if one of those men is married to a current candidate for the office.

Bill Clinton and Jimmy Carter appeared onstage together Tuesday in Atlanta, the 42nd president quizzing the 39th on global politics and making only vague reference to the ongoing presidential campaign. The event closed out the Clinton Global Initiative's annual America meeting.

Neither specifically mentioned presumptive nominees Hillary Clinton and Donald Trump. Clinton took pains not to, advising Carter "don't say anything about America" after asking him to discuss "harsh rhetoric" in politics.

"The truth is they're being mirrored everywhere in the world," Clinton said, referring to backlash from the European refugee crisis and Philippine President-elect Rodrigo Duterte's recent comments that appeared to justify the killing of journalists if they are corrupt or overly critical.

Carter though, blasted a proposal by a major candidate as "the violation of human rights." He didn't get more specific.

"I think there's going to be a reassessment in America by individual citizens and collectively after this election experience that we are involved in now," Carter said. "I think a lot of people feel not only alienated, but kind of disgusted, with some of the campaign rhetoric and the violation of human rights as a public proposal by major candidates. And that's something that I think is going to be corrected in the United States."

Carter blamed the "radical nature" of political campaigns in the U.S. and abroad on many peoples' belief that government is treating them unfairly and doubts that their children will have a better life than they do.

Carter is among Georgia's 15 superdelegates, elected officials and party leaders free to support the nominee of their choice, at the July Democratic National Convention in Philadelphia. Carter hasn't committed to Hillary Clinton or Bernie Sanders but has said he will support the party's nominee.

Carter took a similar approach during the 2008 Democratic primary between Hillary Clinton and President Barack Obama. Although he hinted late in that race that he supported Obama, Carter didn't publicly support until Obama clinched the required number of Democratic convention delegates. Hillary Clinton reached that milestone June 6 according to an Associated Press count of delegates, and she declared victory the next day.

Carter made only a vague reference to Hillary Clinton on Tuesday. After discussing a program pairing volunteer business leaders with people on probation during his time as Georgia governor, Carter suggested it could work again and at a larger scale.

"I think that the government, the governors or the president himself — or herself — can very well expand that," Carter said, prompting laughter from the crowd.

"You got me answering all the questions, but I don't mind," Carter said at one point, prompting more laughter as Clinton defended himself.