Rep. Lee Wong said he needed to get it off his chest, by literally baring his chest. After multiple incidents of racism, the U.S. Army veteran stood up and revealed his military scars during a Board of Trustees meeting in West Chester, Ohio.

WEST CHESTER TOWNSHIP, Ohio - A small-town elected official in Ohio is being applauded for the passionate speech he delivered about the discrimination Asian Americans face.

Lee Wong, a 69-year-old trustee of Asian descent, said he came to the United States at 18. But despite spending most of his life in this country and serving 20 years in the U.S. Army, Wong said "some ignorant people" still come up to him and say he doesn’t look American or patriotic enough.

"I’m going to show you what patriotism, the questions about patriotism look like," Wong said in a Tuesday night meeting before lifting his shirt.

Wong’s chest bears the scars he got while at war.

An elected official in Ohio, of Asian descent, removed his shirt to reveal his war scars during his speech about the discrimination plaguing Asian Americans. (Credit: West Chester Township via Storyful)

"Here is my proof," Wong declared, turning to show his scars to his fellow board members. "This was sustained in my service to the U.S. Military. Now, is this patriot enough?"

Wong said he was once beaten up in Chicago for being Asian. His case went to court, but Wong said his assailant was never punished.

"For too long, we have, I have, put up with a lot of (expletive) in silence, excuse the language, too afraid to speak out, fearing more abuse and discrimination," Wong said.

Wong said the Chicago incident changed the course of his life — inspiring him to join the Army. Once he retired, he resolved to make wherever he’s living a better community. 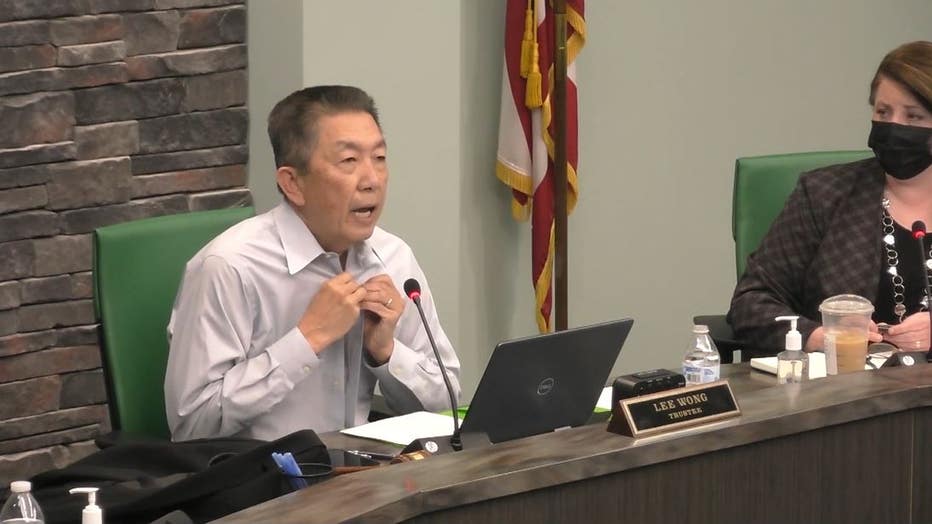 An elected official in Ohio, of Asian descent, removed his shirt to reveal his war scars during his speech about the discrimination plaguing Asian Americans. (Credit: West Chester Township via Storyful)

But he said things have gotten worse in the last few years.

The novel coronavirus that causes the disease originated in China, which some people have used to blame Asian people for the pandemic.

Anti-Asian hatred has come into the national spotlight since a gunman killed eight people inside Atlanta-area spas. The suspect said his alleged crime wasn’t racially motivated, but six of the victims were Asian women.

The incident has drawn condemnation from politicians in both parties.