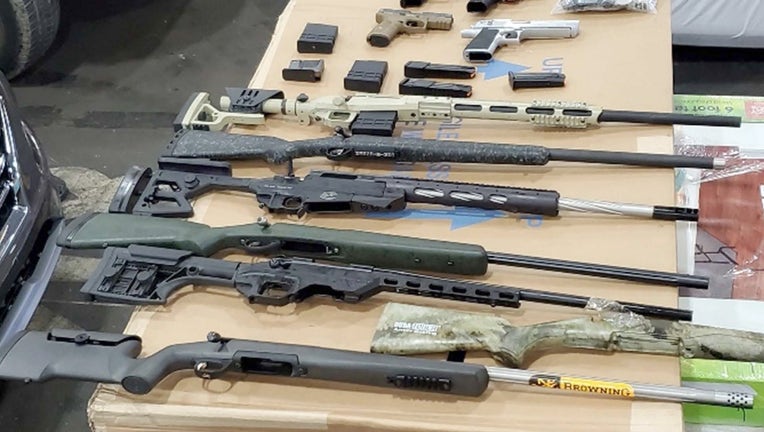 A photo of firearms introduced in the detention hearing for Nihad Al Jaberi. (SDGA USAO)

SAVANNAH, Ga. - A Georgia resident appeared in court in Savannah Monday after being charged with trying to smuggling firearms to Iraq.

Nihad Al Jaberi, a 41-year-old Iraqi national who lives in Clarkston, is charged with smuggling, failure to notify a common carrier, and submitting false or misleading export information.

Al Jaberi, who is a legal permanent resident of the United States, could face up to 10 years in prison if convicted on the smuggling charge.

According to court documents, Al Jaberi is accused of attempting in August of 2020 to export three handguns and six .308-caliber rifles to Iraq through the Port of Savannah. The weapons, which had been disassembled were listed as "71 Pieces of Spare Auto Parts with No License Required" and found in a container with used auto parts.

Officials believe the weapons had been illegally bought by other people at various sporting goods stores in the Atlanta area.

Al Jaberi had been previously ordered to be detained by the U.S. District Court in the Northern District of Georgia.

The case is still under investigation by federal and state agencies.