Early Saturday morning a HPD helicopter on route to a scene crashed into a northeast Houston apartment complex. No one on the ground was injured. The two officers were taken in serious condition to the hospital where one has died and the other in critical condition.

HOUSTON - One police officer has died and another is in surgery after a Houston Police Department helicopter crashed on the north side of the city early Saturday morning.

"Our hearts are broken after the loss of an amazing officer," Chief Acevedo said, "He was a great husband, father, son & friend. Above all else, he was a kind, gentle, generous, & honorable American." 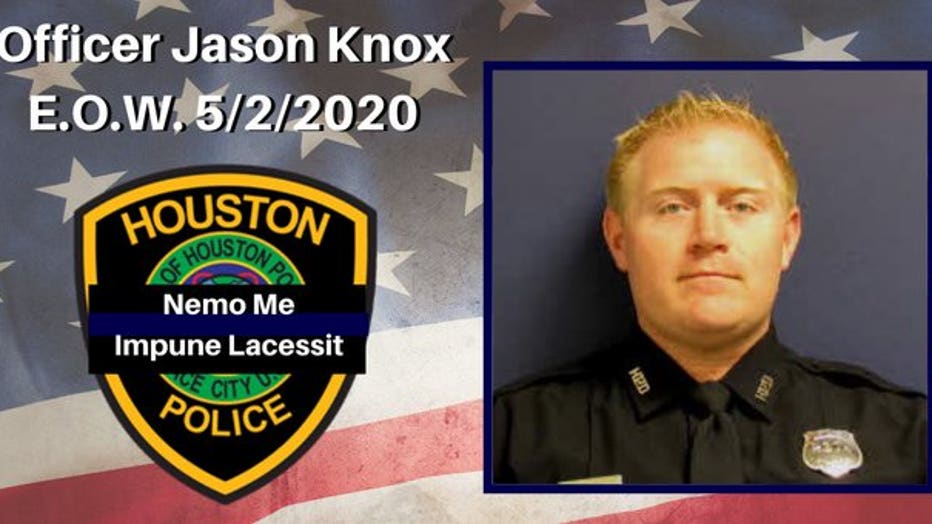 “My wife, Helen, and I and Jason’s, Keira, are deeply grateful for the outpouring love and support of our Houston community. We celebrate all Jason embodied as a committed HPD officer and Pilot who fully embraced his job and we celebrate Jason as he was outside of his work a devoted Husband, a loving father and our only son who we cherish everyday.

Where there is great love, there is great loss. We love Jason with all our hearts, as we always have, and we will keep all that he is alive for his children. As believers, we know Jason is in the loving arms of Jesus Christ, our lord and Savior. We appreciate the privacy you have given us and continue to provide as we walk this road we would never wish for anyone, but that we not accept as ours.”

The crash occurred around 2 a.m. while officers were responding to a call about bodies being seen floating in Greenspoint Bayou.

An HPD helicopter with Cormier and Knox on board responded to the area and began to search for the reported bodies.

Within a few minutes of their arrival, a Houston Forensics Science Center Crime Scene Unit saw the helicopter go down and out of rotation.

FOR THE LATEST NEWS & WEATHER UPDATES DOWNLOAD THE FOX 26 APPS

The helicopter was located at the Biscayne Apartments complex in the 17000 block of Imperial Valley. The helicopter did not hit the occupied apartment buildings, but landed between the clubhouse and a palm tree.

Both Knox and Cormier on the helicopter were trapped inside the wreckage and had to be extricated by the Houston Fire Department.

They were taken to Memorial Hermann Hospital in the Medical Center in critical condition. Knox was later pronounced dead.

Houston Police Chief Acevedo says one of the officers, Tactical Flight Officer Jason Knox, has passed away. He is survived by his wife and two young children.

In a post on Twitter Chief Acevedo said, "His spirit and character will serve to inspire generations to come. Jason, please know your family, colleagues and friends will take it from here."

"The First Lady and I join with the people of Houston in mourning the loss of the Houston Police Department officer who was killed in this tragic accident," said Governor Abbott. "This terrible loss is a solemn reminder of the risks our law enforcement officers face in the line of duty. Our hearts are with the officer’s loved ones and the entire Houston Police Department during this time, and we pray for a swift and full recovery for the officer who was critically injured in this accident."

Chief Acevedo says the pilot is in surgery and has some significant injuries.

“We're hopeful that he will survive," Chief Acevedo said. "Having said that, this is very traumatic, a lot of trauma. And you know that when you have trauma, it can turn very quickly. So we're asking for the community's prayers for everyone involved. From the involved families, our extended air operations unit that we're so proud of that do a phenomenal job day in and day out.”

Officer Knox was featured in an article on the Houston Police Officer's Union website for single-handedly restoring an old police car.