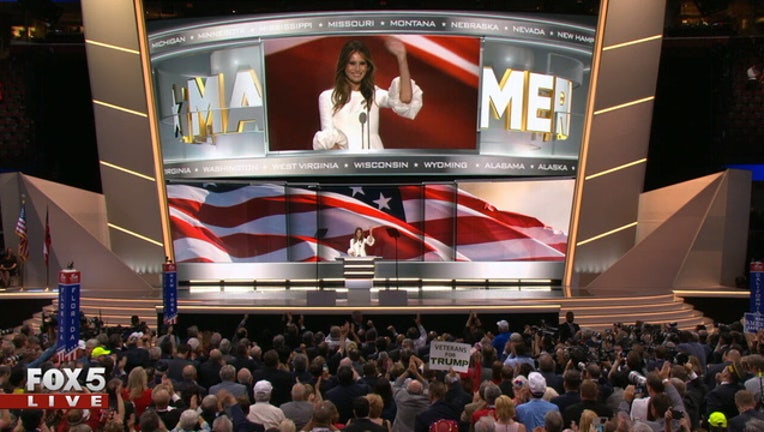 CLEVELAND (AP) — The revelation that Melania Trump's headline speech to the Republican National Convention included passages nearly identical to those from Michelle Obama's 2008 remarks left many people shaking their heads: How could this happen?

Drafting words for America's leaders is typically an intensive process involving weeks of work by speechwriters and careful vetting to root out potential pitfalls. In Mrs. Trump's case, that process appears to have broken down.

A look at how major political speeches are crafted:

Every candidate or president handles the task a bit differently, according to speechwriters who have been on the inside. Some like to get intimately involved from the start, sitting at a keyboard to bang out the first draft. Some hover over the speechwriter while they do the writing. Others wait until there's a draft they can mark up with edits and suggestions.

For a major speech like a convention address, a team of writers led by a senior speechwriter typically tackles the job. Oftentimes the writers will sit down with the speakers and interview them informally about what they want to say. President Barack Obama is known to "download" his thoughts to a writer, then do a heavy rewrite of the first draft.

PICK YOUR THEME, AND YOUR AUDIENCE

For a convention speech, the goal is to amplify the campaign's broader message. Mrs. Trump spoke on a day when the theme was how to "Make America Safe Again." But speechwriters say equally important is identifying what messages the speaker is comfortable with or well-positioned to promote, then base the speech around those themes.

Early in the process, speechwriters typically go back to previous speeches given in similar circumstances to see what worked and what didn't. In the case of a convention speech by a presidential nominee's spouse, there's a fairly limited universe of recent speeches to examine.

One possibility is that Mrs. Trump's writers pulled out compelling passages from Mrs. Obama's speech that they hoped could guide their thinking about how to approach Mrs. Trump's speech, then accidentally left them in the final version.

"It's not uncommon that speechwriters would look to other speeches for inspiration or techniques to drive home a message," said Kevin Madden, a top communications strategist on Republican Mitt Romney's 2012 campaign. "But inspiration and imitation are two different things."

CHECK YOUR WORK — THEN CHECK IT AGAIN

Speechwriters say the vetting and fact-checking component is a crucial part of the process. It usually involves running the speech by communications experts who can identify anything problematic, while the campaign's research department combs through every statistic, historical reference or quote to make sure everything can be defended if called into question.

Trump's campaign has been operating with a smaller staff than usual for a presidential campaign. His operation has leaned heavily on the Republican National Committee's research staff in recent weeks.

Major speeches tend to go through multiple rewrites, and last-minute revisions aren't uncommon. Michael Waldman, who was President Bill Clinton's chief speechwriter when he ran for re-election in 1996, said Clinton wrote a new draft of his convention speech that year in the 24 hours before delivering it.

"It was still being worked on in the limousine on the way to the convention hall," Waldman said.

Still, in most cases, the speaker spends at least some time with aides practicing and tweaking the delivery. That was likely the case with Mrs. Trump, whose first language is Slovenian and who hasn't done much public speaking in the past.