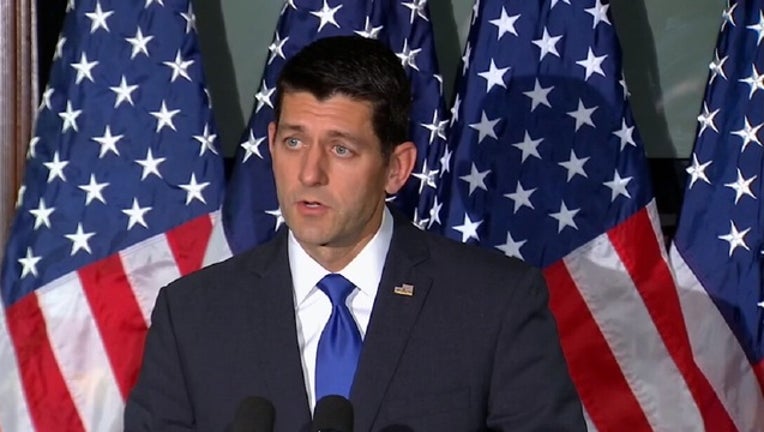 WASHINGTON (AP) - House Speaker Paul Ryan is definitively ruling out a bid for president this year, telling the GOP, "Count me out."

In a statement at the Republican National Committee, Ryan said if the party can't choose a nominee on the first ballot, the eventual choice should only be a candidate who participated in the primaries.

Ryan has faced persistent speculation that he could emerge as the GOP nominee from a contested Republican convention.

The Wisconsin Republican told reporters: "I simply believe that if you want to be the nominee -- to be the president -- you should actually run for it."

Earlier in the day, Ryan said in an interview on WISN radio in Milwaukee that there was no scenario under which he would seek the Republican nomination. Ryan said he called the news conference to "categorically" rule himself out as a candidate.

"I will not allow my name to be placed in nomination," Ryan said. "And it will not be me. I don't know how I can be clearer than that. ... It should be someone who actually wants to be president or is running for president."

He laughed when asked if he was working behind the scenes to "steal the GOP nomination away from Donald Trump and Ted Cruz."

"No, I am not," Ryan said. "This is just amazing. It is just amazing how these things keep going. I am going to try again today to put this to bed. The answer is no, and my strong opinion is if it goes to an open convention ... the delegates should pick among the people who actually ran for president this year."

Ryan's comments come as a contested convention looks likelier by the day. Ryan and his aides have continually denied the speaker has presidential ambitions this year, but their statements have not put the issue to rest. That's partly because Ryan also denied he wanted to be speaker last fall after then-Speaker John Boehner announced his resignation, but ended up with the job anyway.

Tuesday's appearance was an attempt to shut down the speculation once and for all. Yet it may not be enough to quiet the talk about Ryan, given the unpredictable twists of the GOP presidential primary.

Front-runner Trump looks unlikely to accumulate the necessary delegates to clinch the nomination ahead of the July Republican convention in Cleveland. That would allow his lead challenger, Cruz, to make a play for the job.

But if neither candidate can get the delegate votes necessary as balloting progresses in the convention, chaos could result and along with it the potential for some other Republican who's not currently running to emerge. As a young and charismatic conservative, popular with donors and with some conservative activists, Ryan's name has been at the top of that list for months.

Ryan was his party's vice presidential nominee in 2012 and is seen as a possible candidate in 2020. Early in the campaign season he announced he would not be making a run in 2016.

Removing the presidential speculation puts Ryan's focus squarely on his day job as the leader of the House, and he faces several key tests soon.

In a long-brewing embarrassment, it's become plain that Ryan has all but given up hope of passing a budget for the upcoming budget year. Ryan orchestrated four budget efforts as chairman of the Budget Committee over 2011-2014 but now can't produce as speaker. Boehner, his predecessor, presided over five successful budgets

Under the government's arcane budget law, the House is supposed to produce a budget by April 15. But a tea party revolt over Ryan's embrace of last year's bipartisan deal with President Barack Obama to increase spending by the Pentagon and domestic agencies has left him well short of the votes he needs.