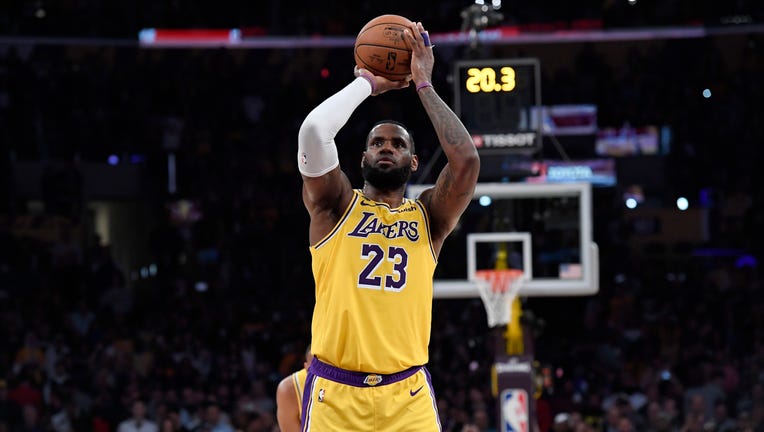 LeBron James of the Los Angeles Lakers scores on a free throw to record his 34,000th career point during the game against Milwaukee Bucks at Staples Center on March 6, 2020 in Los Angeles, California. (Photo by Kevork Djansezian/Getty Images)

CINCINNATI - While the world deals with the many challenges of the COVID-19 pandemic, one of the main issues at hand for athletes is finding a way to stay in shape without access to their normal gyms, facilities and training staff while under quarantine.

Los Angeles Lakers player LeBron James is lucky enough to have a home gym with the set-up you’d imagine for a four-time NBA MVP, where he recorded his workout routine and recently posted on Instagram.

Meanwhile, his teammate Quinn Cook admitted that he didn’t even own a basketball, let alone a home gym equipped to keep a professional basketball player in shape.

The Lakers’ strength and conditioning coaches shipped equipment “kits” to the team with some basic workout essentials, including adjustable dumbbells, weighted bands, floor sliders and basketballs, according to the OC Register. They team also sends daily workouts to players via text and e-mail, which include position-specific drills and concepts to help them stay in shape during quarantine.

For the MLB, players have been forced to scramble to keep athletically in tune during the coronavirus pandemic with no scheduled opening day and the 2020 season being postponed indefinitely.

Los Angeles Dodgers relief pitcher Joe Kelly was apparently working on his changeup in the backyard when one of the pitches missed the practice netting and went right through his window.

NFL players usually use this time to prepare for offseason programs that traditionally start in April. With those programs delayed indefinitely, players are trying to stay connected with teammates via group chats and social media. The NFL draft, being held April 23 to 25, will be conducted virtually.

New Orleans Saints long snapper Zach Wood, who signed an extension just before free agency started, lives in an apartment and his workouts involve push-ups, pull-ups and squats and now more running outside, according to the Associated Press.

Tennessee Titans center Ben Jones also has been working out at home. In a video shared on the team’s social media account, Jones could be seen throwing a medicine ball at the wall beside his garage and lifting weights outdoors.

Linebacker Duron Harmon, who was traded last month to the Detroit Lions after spending seven seasons with the New England Patriots, has worked out on a Peloton bike in his basement. He also uses resistance bands and can run on a hill near his home.

“Anything I need is right here,” Harmon told the Associated Press. “I’m willing to go out there and do that each and every day, until I’m able to get to a gym or to get up to Detroit and work out with the team.”

Tokyo’s 2020 Summer Olympics Games were postponed last month with a new opening set for July 2021. In the meantime, American professional beach volleyball player and two-time Olympic medalist April Ross has been staying in shape by doing lunges, squats and sit-ups while setting a ball to herself against a wall.

RELATED: Tokyo Olympic CEO hints games could be in doubt even in 2021

Sanne Wevers, an Olympic balance beam champion from the Netherlands, was not going to miss out on training during the coronavirus pandemic. She had a balance beam delivered through the window of her second-floor apartment.

Jade Jones, a double Taekwondo Olympic champion, and Bianca Walkden, a three-time World champion, are reportedly best friends and have been self-isolating together in the United Kingdom. They recently transformed a garage into an impressive home gym to stay in shape.

“When you still believe in your dream and you have to do whatever it takes to keep fighting 🥇 WE CAN DO THIS,” Walkden wrote on Instagram.