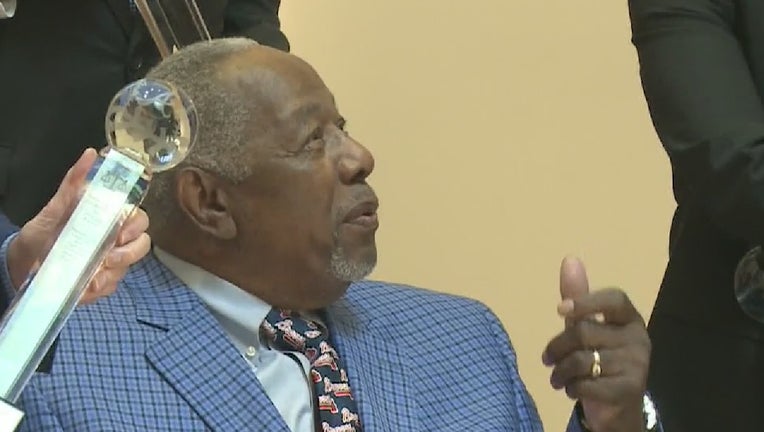 ATLANTA - Hank Aaron was laid to rest on Wednesday, but his legacy will continue thanks to the formation of The Henry Louis Aaron Fund, which will live inside the Atlanta Braves Foundation.

"We want to continue Hank’s amazing work in growing diversity within baseball now and in the years to come," said Terry McGuirk, Atlanta Braves Chairman. "I believe this seed money is just the beginning for this growing fund and I’m certain other companies and organizations who have worked with Hank over the years will join us and add to this call to action to develop talent and increase the diversity on the field and in the front offices across the league."

The goal of the fund is to provide resources to create access and opportunities in sports, business, education, and social and racial equality.

"Henry Aaron was a Hall of Fame player, a front office executive, a mentor, a colleague, and a friend. In each of these roles, he was a tireless advocate for better representation of people of color throughout our sport," said Baseball Commissioner Robert D. Manfred, Jr. "As a philanthropist and businessman, this celebrated power hitter was most passionate about empowering others. We are proud to honor his legacy through this joint donation to the Henry Louis Aaron Fund, and commit ourselves to continue building toward greater diversity and representation in the game Hank loved dearly."

"Hank Aaron was a pioneer for social justice, civil rights, and the fight against racism who knew firsthand the importance of ensuring the game he loved was accessible to all," said Tony Clark, Executive Director of the Major League Baseball Players Association. "We share Hank’s values and commitment."

The Braves will announce additional ways they will honor Hank Aaron in the coming weeks.