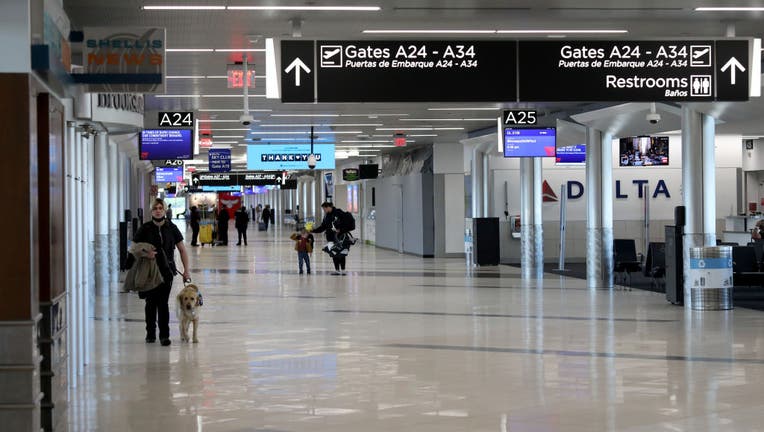 Travelers walk through terminal A at Hartsfield-Jackson Atlanta International Airport on April 20, 2020 in Atlanta, Georgia. (Photo by Rob Carr/Getty Images)

ATLANTA - After 22 years in the top spot, Hartsfield-Jackson Atlanta International Airport is no longer the world's busiest airport.

The Atlanta airport saw traffic drop 61% from 2019 to a total of 42.9 million passengers in 2020, a new report from Airports Council International said.

The new holder of the title is China's Guangzhou Baiyun International Airport, which jumped from 11th to No. 1 with 43.8 million passengers. Atlanta comes in next at No. 2 close behind.

Of the top 10 busiest airports, seven on the list are in China and three are in the United States. Rounding out the top five are airports in Chengdu, Dallas/Fort Worth, Shenzhen, and Beijing.

Speaking to CNN Travel, ACI World's vice president for economics Patrick Lucas said that he expected Atlanta's fall from the No. 1 spot to be temporary.

"While the industry recovers, we expect ATL to retake its spot at the top in the coming years," Lucas said.

About 1.4 million people are passing through U.S. airport checkpoints each day this month, double the number of air travelers in January. Still, the April figure remains about 40% below the pace of April 2019. Lucrative business travel and long-haul international flying remain much more deeply depressed, down around 80% from 2019.

Previous travel bursts have fizzled after COVID-19 infections surged, but the rollout of vaccines has airline leaders cautiously optimistic this time.

Despite the decreased traffic, Hartsfield-Jackson still held on to its record for most guns found at TSA checkpoints.