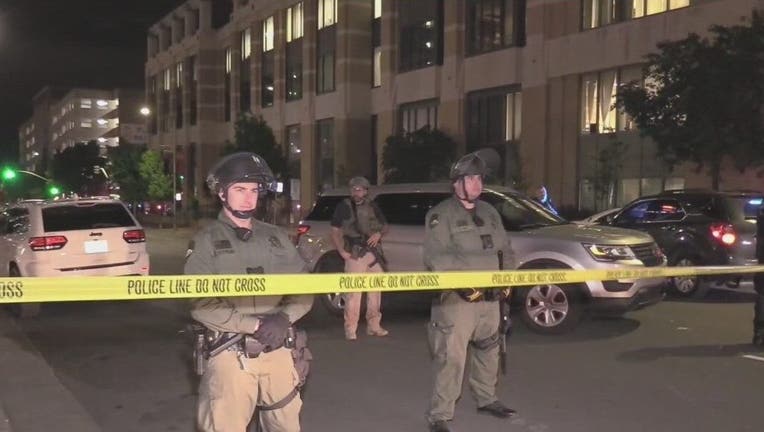 Authorities stand guard after a federal guard was fatally shot and another wounded outside of a federal building in Oakland on May 29, 2020.

OAKLAND, Calif. - An alleged member of a right-wing militia pleaded guilty to charges stemming from the fatal shooting of a federal guard in Oakland more than a year ago.

Kenny Miksch, 21, from San Lorenzo on Monday became the fourth member of the Grizzly Scouts to plead guilty to conspiring to obstruct justice by destroying records about the group after learning that another member had killed Dave Underwood and wounded his partner during a tumultuous night of protests in May 2020.

Milsch could be sentenced to 20 years in prison for conspiring to obstruct justice, federal prosecutors said after announcing the plea.

The Grizzly Scouts identified with the decentralized bogaloo movement, which calls for armed conflict against the government, federal prosecutors said.

Milsch was resposnible for the Grizzly Scouts' training and firearms instruction, the feds said. He and co-defendants Jessie Rush, 29, of Turlock, Robert Blancas, 33, and Simon Ybarra, 23, of Los Gatos have admitted to prosecutors that they discussed taking up arms against the government, including members of law enforcement. They were all indicted in April.

The group is accused in a scheme of destroying evidence, concealing evidence, and interfering in a federal investigation.

The charges against the four, however, center on what happened after they learned that Steven Carillo, another member of their group, was the shooter who allegedly killed Underwood and days later took the life of Santa Cruz Sheriff Sgt. Damon Gutzwiller in an ambush.

Rush, Blancas, Ybarra, and Miksc have admitted that they tried deleting messages on WhatsApp and other records of the Grizzly Scouts.

Rush and Ybarra pleaded guilty to a single charge of conspiracy to obstruct justice last week.

Blancos entered a guilty plea last month to the conspiracy charge, plus two counts of destroying records. He also pleaded guilty to enticing a minor to engage in sexual activity Prosectuors said he received dozens of pornographic photos and videos of a 15-year-old over several months in 2020.

Keep up with the news by downloading KTVU's news app and subscribing to our newsletter.