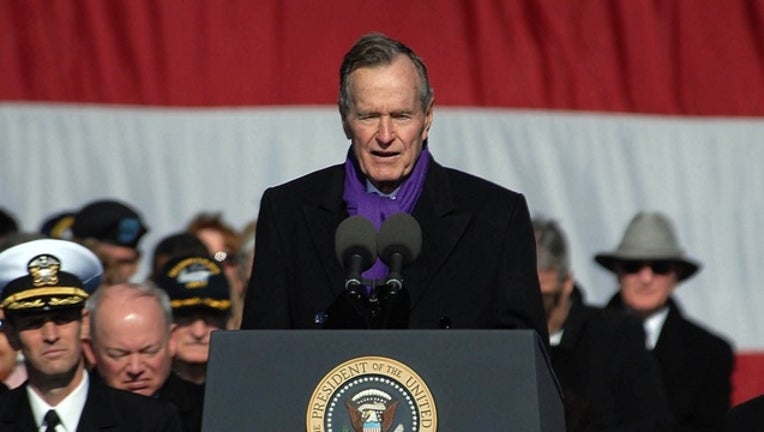 WASHINGTON (AP) - Facing the nation for the first time as its president, George H.W. Bush vowed to lead with humility, moral principle and a spirit of unity.

Deep successes "are made not of gold and silk but of better hearts and finer souls," Bush said in 1989, adding: "America is never wholly herself unless she is engaged in high moral principle. We as a people have such a purpose today. It is to make kinder the face of the nation and gentler the face of the world."

Nearly three decades later, Bush's inaugural address stands in sharp contrast with that of President Donald Trump, a fellow Republican whose brand is defined by material success, unrestrained aggression toward his rivals and disdain for traditional coalitions at home and abroad. Their presidencies separated by a single generation, the nation's 41st and 45th presidents shared little in personality or worldview.

And beyond personality, the conflicting presidencies underscore just how little remains today of the Grand Old Party that Bush once led. Trump's GOP has undercut long-cherished Republican pillars of free trade, federal spending and environmental protection.

One of Bush's former senior aides, Ron Kaufman, now a Republican national committeeman from Massachusetts, said Bush's death marked "the end of a culture - a culture of civility."

Above all, Kaufman and other Republican leaders - many Trump supporters - lamented the partisan divide that dominates modern politics in America, made even starker when compared to the style and substance of Bush.

Public service was the norm for Bush, who held diplomatic posts at the United Nations and in China - along with leading the Republican National Committee and the CIA - before taking office. Bush promoted the value of cooperation as commander in chief, leading the United States into the first Persian Gulf War only after assembling a broad international coalition to help repeal Iraqi forces from Kuwait.

And at home, Bush was a master of smaller gestures that highlighted his belief in the value of personal relationships. He wrote personal notes, sent gifts and stayed in touch with political allies and adversaries alike.

Just two years ago, Bush sent Kaufman what he says may be his favorite Christmas gift of all time: a picture of the five living presidents signed by each of them.

"I defy you to find someone now, anywhere, who doesn't like George Herbert Walker Bush," Kaufman said.

By contrast, Trump is best known for a brash style marked by self-promotion and personal attacks against his rivals.

During the 2016 campaign, he lashed out at former Florida Gov. Jeb Bush, Bush's son, as "low-energy." He continued the rain of insults from the Oval Office. In recent weeks, the president described separate rivals as "horseface," ''a thief," ''a total lightweight" and "a crazed and stumbling lunatic."

And while he had little experience on the world stage coming into office, Trump has been equally willing to criticize long-standing international alliances. He has repeatedly heaped praise on autocrats like Russian President Vladimir Putin and North Korean leader Kim Jong Un, only to lash out at allies like Canadian Prime Minister Justin Trudeau, whom Trump in June attacked as "very dishonest and weak." The U.S. president has also described NATO as "obsolete" and suggested that the United Nations might be "a waste of time and money."

The conflicting styles of an establishment Republican and a political outsider are easy to see even for veteran GOP operative Henry Barbour, who worked in the Bush administration and supports Trump as a Republican national committeeman from Mississippi.

"He was a diplomat, having served in China, so he wasn't rash in his responses. Always thoughtful, deliberate, and I think it served him well," Barbour said of Bush. "Complete class act."

Bush's class, of course, wasn't enough to help him win re-election. He is the last sitting president to lose his bid for a second term.

His political downfall, however, was hastened by his willingness to work with others. The 41st president compromised with Democrats to craft a spending package that included higher taxes, a direct violation of his "No new taxes" campaign pledge.

"He told us, 'I'm signing my death warrant for the second term,'" Kaufman said. "But it was the right thing to do."

Trump has shown no willingness to strike deals with the opposition party. Just the opposite, he has used the power of the presidency to fuel new levels of partisan division.

Among the issues on which he hasn't sought compromise: climate change.

Within days of taking office, Trump signed executive actions to advance the construction of oil pipelines passionately opposed by environmental activists. He said last week that he simply didn't believe an assessment produced by his own administration and scores of scientists warning that climate change posed a profound threat to the health of the nation.

Bush, like the Republican Party of his day, was far more focused on environmental protection. In 1989, his administration penned a memo insisting that "we simply cannot wait" to address climate change: "The costs of inaction will be too high."

Beyond policy, those who knew Bush say he will always be remembered as a family man.

While the current president has been married three times and faces allegations of extramarital affairs, Bush was married to the same woman for more than 70 years. His family affectionately referred to him as "Poppy."

"Even though in some respects the political direction of the country is off in another direction, we'll never forget George H.W. Bush and the contributions he made," said Bruce Ash, a Republican national committeeman from Arizona. "It wasn't just his patriotism, and it wasn't just his service. It was his decency."

"I'm glad he's associated with the Republican Party," he said.