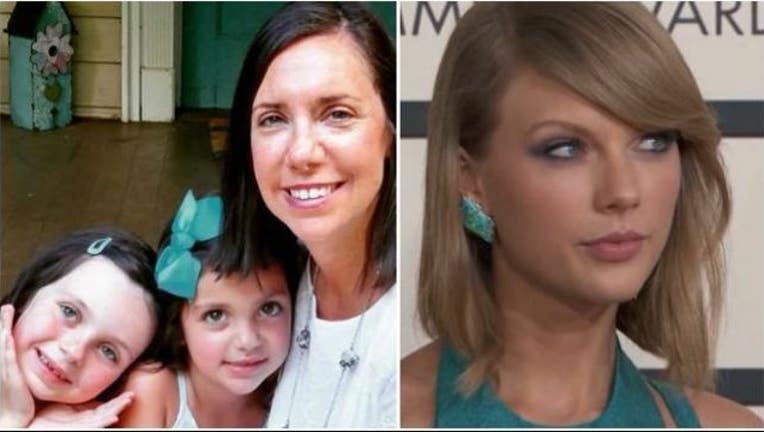 ATLANTA, Ga. - Two little girls, who recently lost their mother to a mysterious illness, will spend Saturday evening with their favorite celebrity.

In July, Stefanie Ballard fell ill after a day at the pool with her two daughters, 7-year-old Riley and 5-year-old Reese.

"She woke up the next morning with chills, headache, started getting nauseous, and then started losing muscle control and actually had a fall," said Ballard’s husband Pete.

Doctors were able to identify Ballard’s brain was swelling, but not the illness causing it. On August 2, Ballard passed away after not responding to treatment and going into cardiac arrest.

Since Ballard’s story was made public, the Buckhead community teamed up to help the family with medical expenses. They organized a yard sale and created a GoFundMe account.

Ballard’s family and friends have remained focused on the two little girls, who happen to be huge Taylor Swift fans.

Shortly after the funeral, a close family friend, Stephanie Houghton, told Q100’s The Bert Show that the community wanted to send the girls to Swift's Atlanta concert. Bert Show’s Bert Weiss said the concert request started with a group called The Buckhead Exchange.

After learning about the Ballard family’s story, The Bert Show wanted to take things a step further… They actually got in touch with Swift.

“As soon as Taylor Swift said ‘yes we’ll do it’ we put that and the rest of the pieces together,” said Weiss.

Swift said she wants the girls to come back stage and Weiss told FOX 5 Riley and Reese will get to hang out with the superstar. The Bert Show wanted to make the night extra special so they added in some star-studded pre-concert perks.

“We put together the limousine, dinner, we’re going to make sure these girls have their hair done and we’re going to get clothes for them before they go down and see Taylor Swift in October,” Weiss said back in August.

Both girls recently had birthdays, so the concert sounds like a perfect way to celebrate them both!

Swift will perform Saturday night at the Georgia Dome as part of the 1989 World Tour.