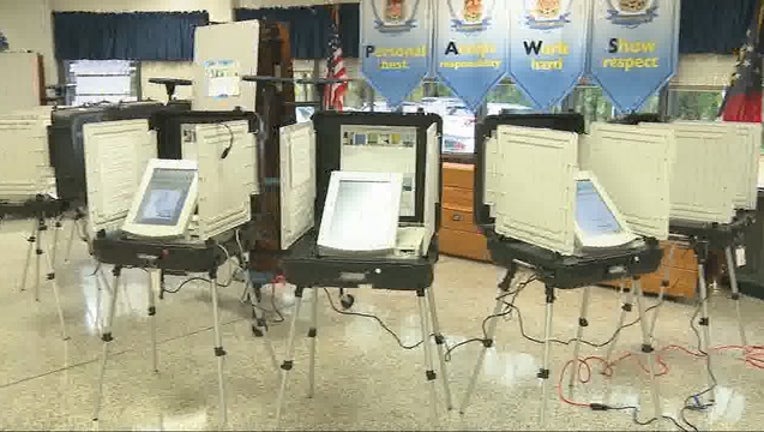 ATLANTA - Voters casting midterm election ballots in Georgia are divided over the state of the nation, according to a wide-ranging survey of the American electorate.

As voters cast ballots for governor and members of Congress in Tuesday's elections, AP VoteCast found that about 4 in 10 Georgia voters said the country is on the right track, compared with about half who said the country is headed in the wrong direction.

Here's a snapshot of who voted and why in Georgia, based on preliminary results from AP VoteCast, an innovative nationwide survey of about 138,000 voters and nonvoters -- including 3,984 voters and 627 nonvoters in the state of Georgia -- conducted for The Associated Press by NORC at the University of Chicago.

Democrats hoped to overcome years of Republican dominance in Georgia, starting with Stacey Abrams' candidacy for governor. She hoped to become the first black female governor in U.S. history as she ran against Republican Brian Kemp. They were competing to replace term-limited Republican Nathan Deal.

The VoteCast survey showed Abrams with a sizeable advantage over Kemp among voters under age 45. Voter ages 45 and older leaned toward Kemp.

Republicans, meanwhile, worked to secure the GOP hold on not only the governorship but all statewide offices. Democrats have been shut out of statewide elected jobs since 2010. And Republican incumbents on the utility-regulating Public Service Commission ran amid an outcry over spiraling costs for the Plant Vogtle nuclear plant expansion.

Top issues for Georgia voters included health care and immigration, each chosen by roughly a quarter of those surveyed.

Voter Julia King touched on both in an election day interview.  "Health, I think, is a right that everyone should enjoy," said King, 20, a college student in Decatur. "And no matter your religion, your gender or immigration status or where you fall on the socioeconomic ladder."

Voter Nicole Whatley said in an election day interview that she disliked President Donald Trump's rhetoric on immigration. However Trump supporter Cindy West said at a recent rally that she supported Trump's immigration stance. "I don't want to be a state that gives sanctuary to illegals," West said.

STATE OF THE ECONOMY

Voters have a positive view of the nation's current economic outlook -- about 7 in 10 said the nation's economy is good, compared with a third who said it's not good.

A strong economy was a selling point used by Trump as he campaigned around the nation for Kemp and other candidates.

"I work at a small business and it's really important for me and my boss, who owns the business, that our taxes stay low so we can stay operating," said Kemp supporter Ryan Henschel, an 18-year-old casting his first ballot.

Economic inequality was on the mind of some voters supporting Democrats. Brian Sherman, 75, of the Atlanta area community of Decatur, said he was voting for Democrats to address that issue.

For nearly half of Georgia voters, Trump was not a factor they considered while casting their vote.

But nearly a fourth said a reason for their vote was to express support for Trump, and close to a third said they voted to express opposition to the president.

"I think that Trump has promoted fear and bigotry in this country and really enabled the rise of fascism and I think today is an opportunity to turn that tide," voter Lena Kotler, in Decatur, an Atlanta suburb, said Tuesday.

West, on the other hand, ran through a list of issues that aligned with Trump positions.

"I'm concerned about the Supreme Court," West said, "I'm anti-abortion, so that is always at the top of the list, and I want to build the wall."

In Georgia, about three-fourths of the registered voters who chose not to vote in the midterm election were younger than 45. About three out of five of those did not have a college degree. About as many nonvoters were Democrats as Republicans -- roughly one-third for each party.

VoteCast is a survey of the American electorate in all 50 states conducted by NORC at the University of Chicago for The Associated Press and Fox News. The survey of 3,984 voters and 627 nonvoters in Georgia was conducted Oct. 29 to Nov. 6, concluding as polls close on Election Day. It combines interviews in English or Spanish with a random sample of registered voters drawn from state voter files and self-identified registered voters selected from opt-in online panels. Participants in the probability-based portion of the survey were contacted by phone and mail, and had the opportunity to take the survey by phone or online. The margin of sampling error for voters is estimated to be plus or minus 2.0 percentage points. All surveys are subject to multiple sources of error, including from sampling, question wording and order, and nonresponse. Find more details about AP VoteCast's methodology at http://www.ap.org/votecast.