Young girl gets reassurance from sheriff

A 10-year-old Newton County girl was getting more than a little nervous about police officers after recent news stories but the local sheriff dropped by to help reassure her.

"I got a Frisbee, a card, a badge, a keychain holder," the Covington, Georgia, girl says.

The gifts are part of a special visit orchestrated by Newton County Sheriff Ezell Brown.

But, to really understand why this soft-spoken elementary school student ended up hanging out with her local sheriff, you have to go back to the beginning of June.

Watching the national news, after the death of George Floyd, Briana Cox's mother Kimmie says she was becoming increasingly frightened of the police.

"Because they were killing Black people for no reason," Briana Cox explains.

"She just asked me, 'How come the police are killing Black and Brown people,'" her mother Kimmie Cox says. "She was, like, 'What did we do?  We were born this way!'"

Unsure of what to say to her daughter, Kimmie Cox emailed the Newton County Sheriff's Office, where a staff passed along her email to Sheriff Brown. 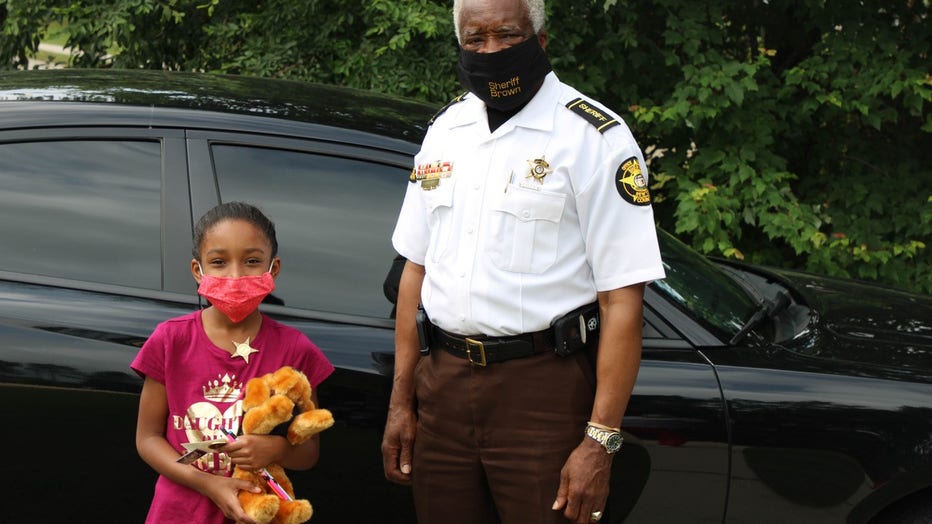 So, he surprised Briana with a visit to her home earlier this week, to talk about law enforcement and what she had seen on TV.

Sheriff Brown says he has a 12-year-old granddaughter, who has voiced some of the same concerns Briana Cox expressed to her mother.

Then, Brown invited Cox and her mother to come to visit his department and meet his officers, as a way to help her feel more comfortable with men and women in uniform.

On Friday, she toured the office and got to see where officers undergo training on how to deal with the public.

"We went around the office, learning what they do here," Briana Cox says.  "I learned that everyone has to do a lot of training, and you have to do a lot of work."

And Sheriff Brown assured Briana his officers work for her.

“That’s what we're trying to instill in Briana today," Sheriff Brown says.  "She can go to an officer and trust an officer and know that officer is here not only to protect her but to provide her with any sort of help that is needed."

It was a big day for the junior deputy and her new friends.

"I think they're not all bad, and that I'm not scared anymore," Briana Cox says.