The staffers of a Stone Mountain senior community moved and then locked down the facility to help residents self-isolate from the coronavirus.

Moore became convinced the only way to protect the 500 seniors of Park Springs Life Plan Community would be to shut the 61-acre campus down. 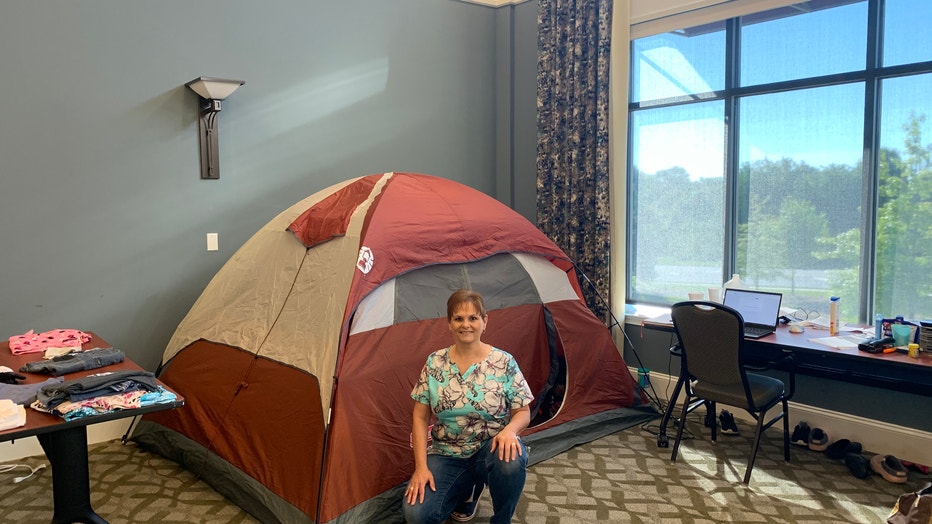 "It became apparent to me that the single most important thing I could do would be to limit human traffic, and to lock in our campus, to lock our members in, to lock ourselves in.  And, I asked for volunteers."

About 60 of 300 staff members raised their hands, she says.

Six weeks later, she's one of now 73 staff members still hunkered down at the facility.

Nursing home administrator Nadia Williams has been at the facility six weeks.

“I didn't think twice about it," Williams says. "I knew I'd signed up to protect my members and lead my staff.”

They planned on staying for two to four weeks.

"None of us thought we'd be here longer than a month," Moore says.

The goal was to keep outsiders from coming into the 61-acre property, and limit movement between the different units, which include independent living, assisted living, long term care and a memory care unit.

Moore and her team used zippered walls to quarantine off the units that housed higher-risk patients.

Staffers and residents, or "members," as they're called here, were sequestered together in clusters.

Six weeks in, the lockdown seems to be paying off.

Moore says Park Springs has had no infections in their long term and memory care units.

She says they have had three patients and four staff members test positive for COVID-19. The patients were in the campus' healthcare unit, where they could be isolated. Staff members were sent home to self-quarantine.

As the weeks passed, Moore realized she would have to ask the staff to extend their commitments.

"I told them, 'I appreciate your service. Thank you for what you've already given. If you can give more, that would be fantastic. If you can't, that's okay," Moore says.

Moore says 73 staff member have chosen to stay on until early June.

For Nadia Williams, it meant missing her little sister’s wedding in Florida.

"It was heartbreaking," Williams says. "As children, we talked, we planned, we discussed. We knew exactly how things were going to be for our weddings."

Instead, wearing a sequined yellow dress she picked up back home in England, and carrying a hand-made bouquet, the 30-year-old “virtually” stood by her sister’s side, on Zoom.

It wasn't what she wanted, she says, but it was okay.

"I was taking pictures, encouraging them, and I got to give my speech," she smiles.

Moore, who is married with two daughters in college, misses her family, too.

Ginger Hansborough, a manager in the independent living community, says she is committed to stay as long as she is needed here.

Hansborough says she's grown close to her team of 27, who have become like family to her.

Nadia Williams, who left behind a partner to move into Park Springs, says she is happy she volunteered for this.

“The rewarding part is to see the members," she says.  "They're so happy.”

That makes her proud, Williams says.

"This is a story I will definitely tell for generations to come," Williams says. "I was part of a group of people who are true heroes, in every sense of the word."