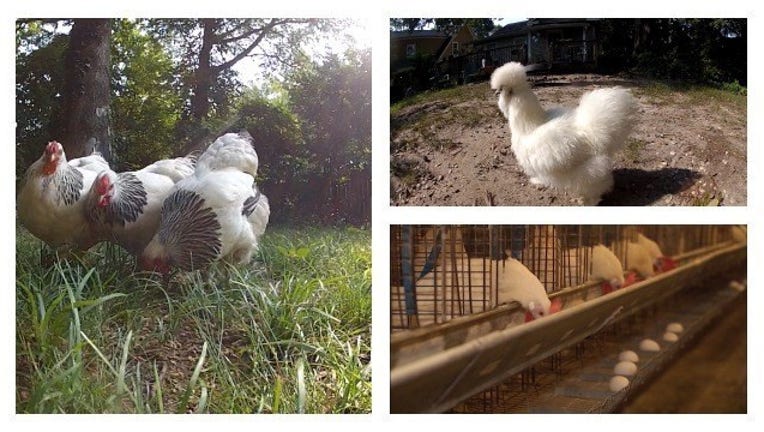 Avian influenza - or bird flu - has wiped out nearly 50 million birds out West and in the Midwest.  And this fall it's expected to head our way.  Local poultry farmers are getting ready for a worst-case scenario.

They're getting ready by barring unnecessary traffic to the farms.  And for folks who do have access, they are covered in hazmat suits and virus-killing washes. But state agriculture vets also need small, personal-use farms and backyard coop owners to enhance security.

The big farms have biosecurity alerts at every entrance.  Disinfectant is sprayed on tires assuming they are contaminated with the avian influenza virus.

“Every farm, probably in this country, is locked down like this right now,” said Ken Martin of Fieldale Farms.

With the virus headed toward Georgia in the fall with migrating birds, the nation's largest poultry producer has pumped up already strict procedures. More disinfectant is applied to boots, not once, but twice before the farmer gets into the chicken house.

Poultry veterinarian and head of the state's top poultry lab said, “This is not new. We've been preparing for avian influenza for about 10 years - table tops, lab exercises, field exercises. So, it's not like we're not ready and just now getting ready, we've been ready.”

The state-of-the-art Georgia Poultry Lab Network is where the first signs of the virus will likely be detected.  The big poultry producers know the procedures and have for a long time, but it’s on emerging, backyard farms where state vets need to see security reinforced.

A local farmer showed us pictures of her farm – one of three where flocks were euthanized from small farms the USDA said may have been exposed as they came to Georgia from an Iowa farm that later saw the virus.

“What is different now is that all of our growers and all of our backyard owners really realize what's going on so they can protect their own flocks better,” said the director of the poultry testing lab.

She said, just like a big poultry farm, these personal-use flocks need to feed indoors as wild water fowl just passing through are attracted to domestic birds and their food source.

“If we get influenza, a foreign animal disease, that's highly deadly to our chickens in Georgia, it would really be devastating.  It's not just about the farm getting it, it's about trade being paralyzed.  It's about our industry being paralyzed.”