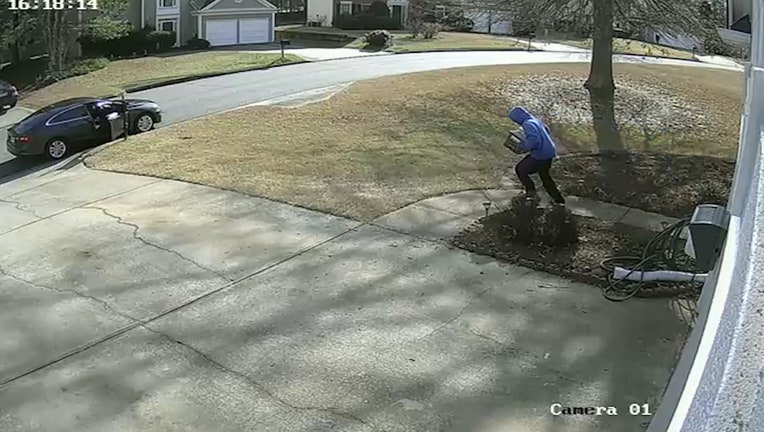 This surveillance image shows a porch pirate who stole packages from a Duluth home on February 15, 2020. (Courtesy: Duluth Police Department)

ATLANTA - No matter whether the packages contain jewelry, electronics or dog food, porch pirates who steal them in Georgia could soon face felony charges.

"We need something to curb this porch piracy that's going on," said State Rep. Bonnie Rich (R-Suwanee).  "I mean, it's becoming more and more common."

Wednesday, Rich filed House Bill 954, which would add "porch piracy" to the state's criminal code. Currently, she explained, stealing a package from someone's doorstep is only a misdemeanor unless the value of the item is more than $1,500.

"The majority of us are ordering things that are ordering items that are significantly less expensive than that but can be quite a lot of money for us to lose those products. So, this is meant to deter the porch piracy," Rep. Rich explained.

The legislation also makes "theft by possession of stolen mail" a felony. To be charged, an individual would have to have 10 or more pieces of mail from 3 or more addresses.

"In essence, this creates a presumption that they stole it, really," said Rep. Rich.

Both new crimes would carry sentences of one to five years in jail.

"It's more akin to a burglary than a regular theft because someone who is brazen enough to go up to the porch or the door at someone's home and steal is more likely to have a violent encounter with the homeowner who happens to open the door in that process," Rich stated.  "So, it should be a more stiff penalty."