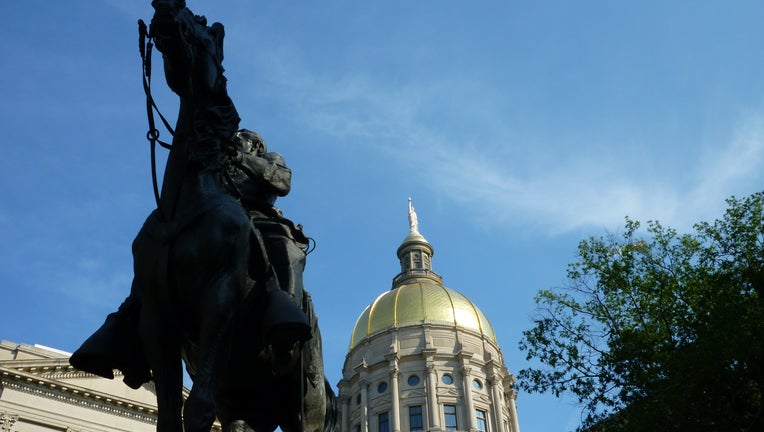 The Democratic House Minority Leader is calling on Gov. Kemp to remove the statue of Confederate General John B. Gordon from the U.S. Capitol.  (By Yk Yk Yk - Own work, CC BY-SA 3.0, https://commons.wikimedia.org/w/index.php?curid=15317049)

ATLANTA - The Georgia House Minority Leader has called on Gov. Brian Kemp to remove the statue of a Confederate general from the grounds of the U.S. Capitol.

Gordon was a Confederate general, Georgia governor, and senator who is believed to have been the head of the Ku Klux Klan in the state after the Civil War. His statue was unveiled in 1907, in which he is dressed in Confederate regalia on his horse, Marye.

"The statue's nexus to hate in our state is overwhelming," Trammell said. "Its presence is both divisive and offensive."

The House Minority Leader also said Gordon's statue "does not represent Georgia, and we should not invest capital in defending idols that hurt Georgians and stain Georgia's image."

Kemp had previously made it harder to relocate Confederate monuments by signing a bill in 2019 which would fine those convicted of vandalizing monuments up to three times the cost of the damage, as well as legal fees and expenses for repairing or replacing the monument.

The legislation came about partly in response to failed proposals that would have allowed local governments to remove Confederate monuments after pressure intensified during protests in Charlottesville, Virginia over the planned removal of a statue of Confederate Gen. Robert E. Lee.

MORE: No arrests made during Sunday’s protests in Atlanta

While running for the governorship in 2018, Kemp said that he would "protect Stone Mountain and historical monuments in Georgia from the radical left," arguing that Georgians should focus on learning from the past rather than attempting to "re-write it."

You can read the entire letter below: