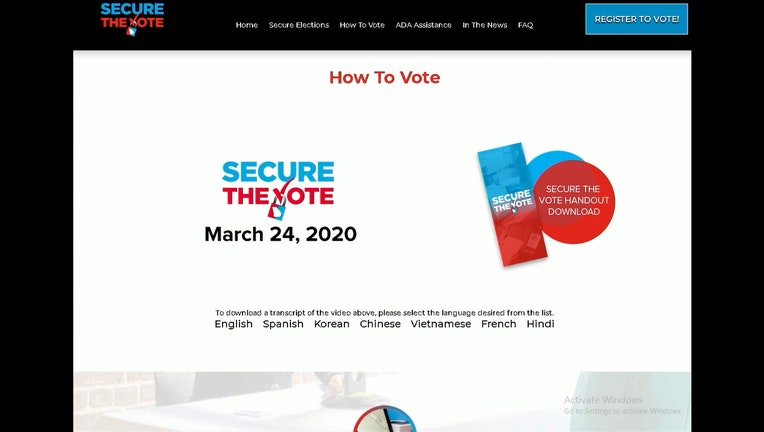 ATLANTA - With a little more than three months until the presidential primary, Georgia officials want voters to be ready for the state's new voting system.

The Secretary of State's Office just launched a new voter education campaign called "Secure the Vote."  They have set up a website at SecureVoteGA.com and plan a social media push to make sure voters are aware of the changes.  They have also held several hands-on demonstrations around the state.

While voters in six counties used the machines in November as part of a pilot, most will use them for the first time in the presidential primary on March 24, 2020.

"Many voters don't realize there's a new system.  We've been using that existing system since 2002, but come the presidential primary, there'll be a new system," explained Secretary of State Brad Raffensperger.  "We'd like to get everyone prepared."

Raffensperger described the new system as "similar, but different."  Voters will still use an electronic card to load their ballot onto a touch screen machine and then make their selections.  The new machines, however, are connected to a printer.  So, in addition to recording votes on the card, the system will also print a paper ballot so that voters can review their selections on paper before casting their ballot.

Some critics would still like to see the state move away from electronic voting machines and instead use hand-marked paper ballots.

"We did hand-marked paper ballots in Cobb County.  We actually had more issues with the hand-marked paper ballot systems than we did with the ballot-marking device.  But at the end of the day, the ballot marking device is being used throughout the country.  It is certified by the United States Election Assistance Commission, which is a bipartisan comission--has two democrats, two republicans on it.  So, nothing happens without buy in from both sides of the aisle," Raffensperger said.

To schedule a group demonstration of the new machines, Raffensperger said those interested can contact their state lawmaker.