Someone set off an explosive device at the site of the controversial northeast Georgia monument. The site has been subject to vandalism for years, so the association installed cameras.

ELBERT COUNTY, Ga. - Former Georgia gubernatorial candidate Kandiss Taylor reacted to what law enforcement are calling an explosion at the Georgia Guidestones, which Taylor promised to "rid" the state of during her campaign.

The Georgia Bureau of Investigation said an explosion damaged a controversial Georgia landmark on Wednesday. The GBI said Wednesday unknown people were responsible for the damage. As of Wednesday afternoon, investigators had not connected Taylor to the criminal investigation of the monument's destruction.

Taylor tweeted after news of the alleged explosion broke, calling the Guidestones "Satanic."

Taylor promised to demolish the stones when running for governor, proposing a potential executive order. She linked them to "demonic" worship and human sacrifice in a video.

Taylor's stance on the Georgia Guidestones caught the eye of "Last Week Tonight" host John Oliver, who ranted about Taylor's promise to remove the stones.

The Georgia Guidestones, a granite attraction in Elbert County, are located off of Guidestone Road just east of Ga. Highway 77.

Taylor released a video on Wednesday evening to clarify her position about the Georgia Guidestones.

"If anyone says that I do not believe in law and order and that I would support vandalism, that I would support going outside of our legal system, to demolish something, to vandalize something, they are a liar," Taylor said in the video. "I would never support that. In fact, I think anyone who goes on private or public property to destroy something illegally should be arrested."

Taylor said she believed her words were being twisted and reiterated she only wanted to have the mysterious monument removed through legal means once she took office. She again pointed out it was one of the executive orders she planned to issue if she took office.

"I believe vandalism is illegal and sometimes, people like to call vandalism instead of actually giving God credit because they don’t know how to explain what happens when God moves," Taylor said. "So, until I see a video that shows me anything than what looked like lightning or the hand of God moving on a situation, I’m going to believe it was God."

Taylors said if it was vandalism that there are cameras everywhere and those individuals should be brought to justice.

Early Wednesday afternoon, the GBI released videos showing the explosion that damaged the now-demolished monument. Investigators also released a video showing a silver sedan with a sunroof leaving the scene

"I believe in law and order in this country," she said.

Who is Kandiss Taylor?

Taylor is a GOP activist and educator.

Taylor was outspoken against the established Republican candidates David Perdue and incumbent Gov. Brian Kemp. Taylor called for an audit of the 2020 election.

She said she supports gun rights and is pro-life. On her campaign site, Taylor says some of the topics she's passionate about include education and mental health.

What are the Georgia Guidestones? 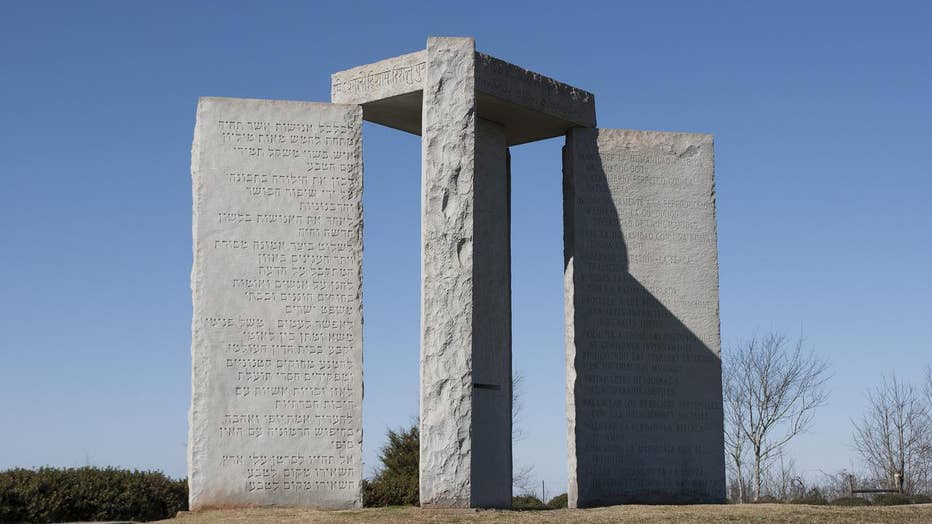 The origin of the monument is ambiguous. They were allegedly commissioned by a person under the name R.C. Christian, established in 1980 and have become a roadside attraction for travelers. It's sometimes referred to as "America's Stonehenge" for its unknown origins and size.

The monument is 19 feet high and each stone block weighs about 42,000 pounds. It serves as a calendar and is inscribed with a 10-part message in eight different languages. They're a celestial calendar.

The messages are "guidelines" to humanity, that people have suggested are a "cult message."

"They were meant for a future population after a cataclysmic event," Kubas said.

Elberton colloquially known as "the Granite Capital of the World." The stones were crafted from locally-mined granite and built by an Elberton-area company.

What do the Georgia Guidestones say?

The English portion of the inscription reads:

"Maintain humanity under 500,000,000 in perpetual balance with nature.

Rule passion — faith — tradition — and all things with tempered reason.

Protect people and nations with fair laws and just courts.

SKYFOX flew over the scene and saw one of the pillars reduced to rubble. The top block also appeared to be damaged in the corner that was supported by the demolished block. It's not clear which languages were on the destroyed block.

The guidestones are the centerpiece of online conspiracies.

Over the years the Guidestones have been subjected to graffiti and vandalism.

"But we've never had this level of damage ever done to the Guidestones," Kubas said.