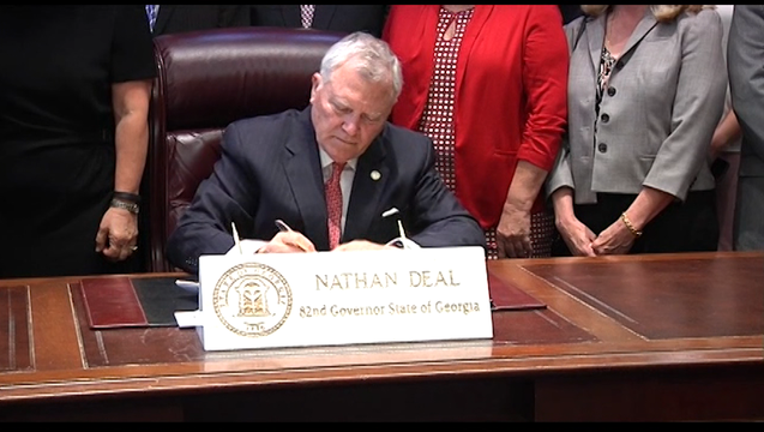 Gov. Nathan Deal — subject to term limits and free of re-election pressure — vetoed a measure intended to protect opponents of gay marriage just days after the close of the legislative session in March. He waited until Tuesday — the last possible day to issue vetoes — to block a bill to allow people over 21 with state permits to carry concealed handguns on college campuses.

While both proposals were popular with the majority of Georgia's Republican lawmakers — and presumably their constituents — Deal will likely never face voters again. The two-term governor is barred by the constitution from a re-election run and has said he plans to retire from political life at the end of his term.

Rep. Rick Jasperse, a Republican from Jasper, sponsored the so-called "campus carry" bill and said he thinks Deal's reputation with conservatives in the Legislature will take a hit, but lawmakers plan to continue working with him.

"The way I look at it, this is a great civics lesson," Jasperse said. "With the legislature, I'm out here listening to the people, then the governor gets to do what he wants. Does he lose credibility? I think maybe a little, but I feel we still have to work with the governor."

Without a doubt, Deal faced aggressive lobbying to block the measures. The state's business community, with help from giants like Apple, the Walt Disney Co. and the NFL, mobilized against the so-called religious exemption bill. The bill would have allowed church-affiliated religious groups to invoke faith reasons when refusing to serve or hire someone and clergy to refuse to perform gay marriages. Deal, in explaining his veto, said no examples had taken place in Georgia.

The campus gun measure was opposed by the state's powerful Board of Regents, which oversees the university system, and all 29 of its campuses' presidents and police chiefs. Deal, referring to Thomas Jefferson and James Madison opposing guns on the University of Virginia campus, concluded that "no justification exists" to allow firearms into "sanctuaries of learning."

Jasperse, however, said an armed robbery on the Georgia Tech campus on Tuesday highlighted the need for concealed carry legislation for college campuses.

The Legislature already has adjourned for the year and many members face primary elections in May, making override attempts extremely unlikely. However, supporters of both bills already vow to return with similar proposals next year. Deal will lead the state through the end of 2018 and plans to focus on an overhaul of education in Georgia, including the state's method for funding schools.

The National Rifle Association, one of the premier lobbying groups behind the bill, has voiced disapproval of the veto.

"The NRA is thankful to Lt. Gov. Casey Cagle and the legislators who worked to protect law-abiding citizens' constitutional right to self-defense on campus and we look forward to working with them next session to pass this important safety legislation," NRA spokeswoman Catherine Mortensen said in a statement.

Nine states have laws on the books allowing concealed handguns on campus: Colorado, Idaho, Kansas, Mississippi, Oregon, Texas, Tennessee, Utah and Wisconsin. According the National Conference of State Legislatures, 23 states leave the decision to ban or allow weapons up to the individual colleges and universities, and 19 states — still including Georgia — ban concealed weapons on campuses.

Democrats credited students, faculty and other opponents with helping defeat the "ill-advised" measure.