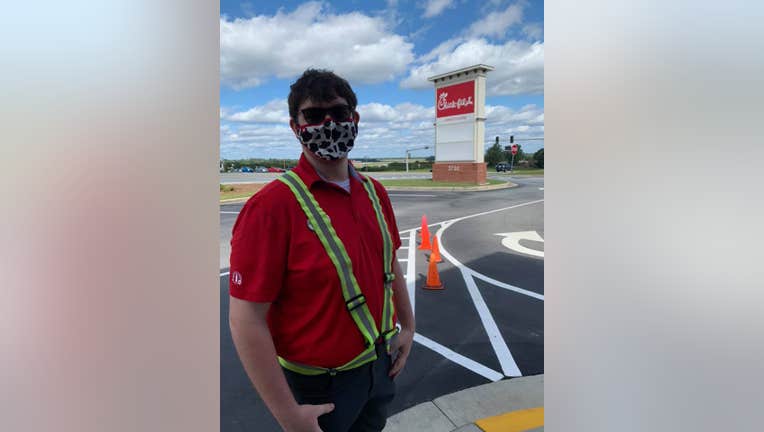 COLUMBUS, Ga. - A Columbus Chick-fil-A employee went about and beyond his normal job functions and he jumped into action to save a child's life.

Zack "Cowboy" Kokenzie was working the drive-thru earlier this week, and heard loud cries coming from one of the cars in line, according to a Facebook post from the Chick-fil-A, located on Manchester Expressway.

He went to the car where the commotion was coming from and saw a father and another customer trying to a help a child in a car seat who appeared to be chocking. It was soon discovered that the seat belt was wrapped around the child’s neck.

Kokenzie is a former Eagle Scout and certified in CPR. He used a pair of scissors to cut the child free from the strain of the seatbelt.

Kokenzie recently earned the nickname “Cowboy” for nearly breaking his finger while riding a horse that tried to buck him off.

Chick-fil-A store operator Alex Vann expressed his appreciation to Cowboy and the team saying, “Zack and our team acted quickly in rescuing a child from a life-threatening situation. I am proud of Zack, Justin and our team for their quick thinking and quick responses. This could have been far worse, but Zack and others were in the right place, with the right training and the right attitude to potentially save the life of one of our customers. We are glad everyone is alright.”