KENNESAW, Ga. - A Cobb County Boy Scout came up with a way to retire old American flags while honoring military veterans. He set out to collect 500 flags, and more than tripled that goal.

Jacob is a member of Boy Scout Troop 002.  This is his Eagle Scout project.  When word got out about what Jacob was doing with the tattered flags, donations started pouring in.

"Nationwide. Coast to coast, we have at least one flag from every state," said Jacob.

The Cobb County teen has stacks of letters from people who mailed him flags.  One woman from Colorado sent him the flag that was over her father's casket.  Her father had served in the US Army. 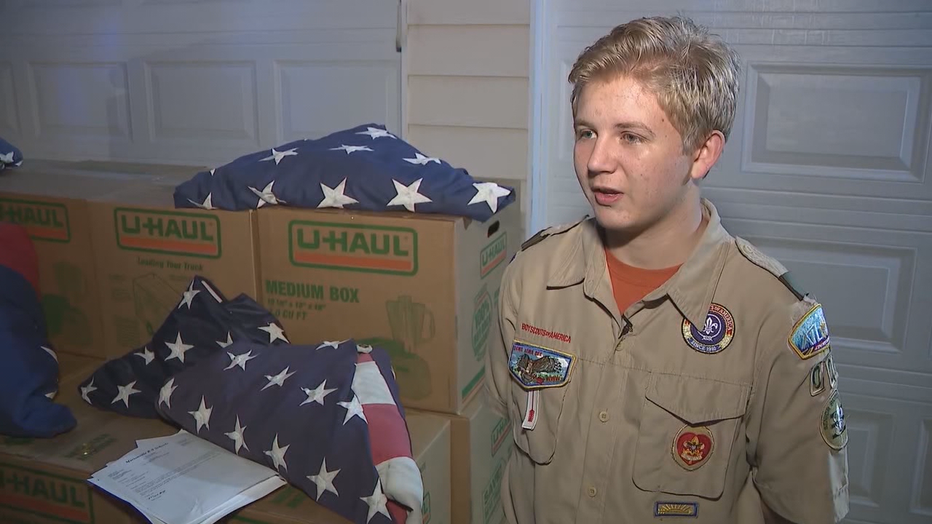 "She says she thought this is what her father would have wanted done with his flag," said Jacob.

"Just the fact that someone his age would even think about something like that, something that honors veterans but also retires something very important to this country, our red white and blue," said Kevin Marcy with Georgia Funeral Care.

The families will know their loved ones were given an honor they deserve.

"The families of those bodies being cremated will get a star from the flag along with the white stripe on the side," said Jacob.

They will also receive a certificate saying the flag was donated as part of Jacob's Eagle Scout project.

Donations of flags are still coming in.  If anyone wants to donate, they can send the flags directly to Georgia Funeral Care. The address is 4671 South Main Street, Acworth, GA 30101

The owner says they do about 500 military veteran cremations a year.