A federal appeals court will hear arguments Friday on whether it should overturn a lower court ruling that permanently blocked a restrictive abortion law passed in Georgia in 2019.

ATLANTA -  A federal appeals court seemed to indicate Friday that it would wait until the U.S. Supreme Court rules on a case that seeks to overturn its landmark decision guaranteeing a woman’s right to an abortion before ruling on the appeal of a lower court’s ruling blocking a restrictive Georgia abortion law.

The U.S. Supreme Court is set to hear arguments in December on an attempt by Mississippi to overturn the high court’s decision in Roe v. Wade, which affirmed the right to an abortion. Mississippi’s law would ban abortions later than 15 weeks into a pregnancy.

A three-judge panel of the 11th U.S. Circuit Court of Appeals heard arguments Friday on whether it should overturn a lower court ruling that permanently blocked a 2019 Georgia law that would have banned most abortions once a "detectable human heartbeat" is present. As early as six weeks into a pregnancy, before many women realize they’re expecting, cardiac activity can be detected by ultrasound in cells within an embryo that will eventually become the heart. Abortion is currently available in Georgia up to 20 weeks into pregnancy.

Circuit Chief Judge William Pryor asked lawyers for both sides whether the case should be stayed until the Supreme Court rules in the Mississippi case. Attorneys for both sides said they would be fine with that.

"I think that’s the prudent way to proceed," Pryor said. "You’re both saying you don’t have a problem with that. Don’t you agree, though, that that’s really what we ought to do? I mean it’s not every day that ... we can allow the Supreme Court to do some work for us."

Just over a month after Republican Gov. Brian Kemp signed the law in May 2019, The ACLU, Planned Parenthood and the Center for Reproductive Rights sued on behalf of Georgia abortion providers and an advocacy group to block the law.

U.S. District Judge Steve Jones ruled in July 2020 that the law was unconstitutional. The state appealed to the 11th U.S. Circuit.

"The court rejects the state defendants’ argument that the statutory purpose solely concerns ‘promoting fetal well-being,’" Jones wrote. Instead, he wrote, the law’s specific references to Roe v. Wade and "established abortion related precedents" indicate that its purpose "was to ban or de facto ban abortion."

The law included exceptions for rape and incest as long as a police report is filed. It also provided for later abortions when the mother’s life is at risk or a serious medical condition renders a fetus unviable.

The law also would have granted personhood to a fetus, giving it the same legal rights as people have after birth. That would make a fetus a dependent minor for tax purposes and trigger child support obligations.

Jeffrey Harris, a lawyer for the state, argued that Jones should have heard from state experts who would have testified as to why it makes sense to use the detection of a heartbeat as a threshold.

Pryor said it seemed that still would not clear the "undue burden" standard.

"It seems to me that, at least based on the stipulated record, you couldn’t possibly win," he said. 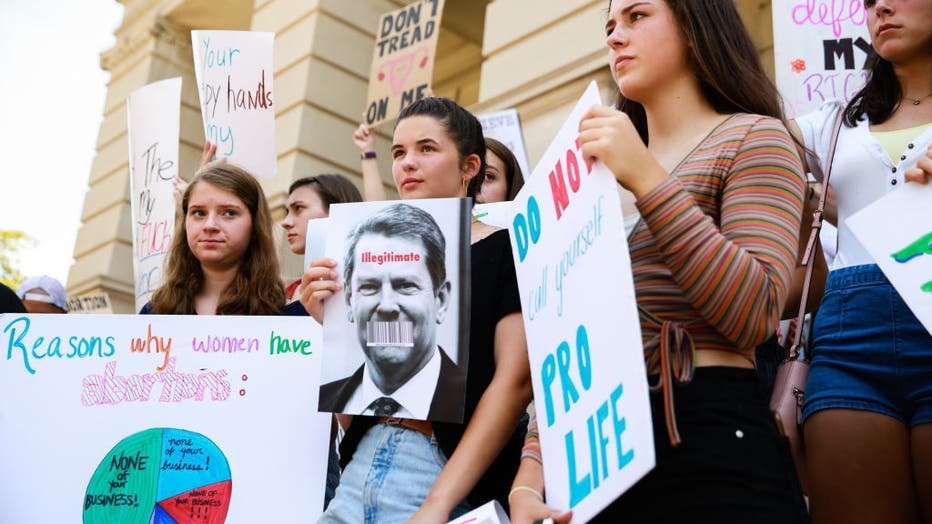 Young women from Paideia High School hold signs during a protest against the abortion ban bills at the Georgia State Capitol building on May 21, 2019. (Photo by Elijah Nouvelage/Getty Images)

Georgia’s so-called heartbeat law was one of a wave of laws passed by Republican-controlled legislatures in recent years to attack those rulings as anti-abortion activists and lawmakers saw opportunity in a new conservative Supreme Court majority.

Harris also rejected arguments that defining a fetus as a "natural person" is unconstitutionally vague and said Jones should have allowed "common sense fetal well-being provisions" of the law that don’t have to do with abortion to take effect.

Pryor indicated the state seemed likelier to succeed on those issues.

Watson argued that the purpose of the law is to ban abortion, both explicitly and by changing the definition of a "natural person" to include fetuses. For that reason, she said, the whole law must be blocked.

Opponents of the law have said changing the definition of a "natural person" to include fetuses could criminalize all sorts of health care that has nothing to do with abortion. The state has said that’s not the case.

Friday’s arguments came amid a heightened focus on abortion. Not only did the Supreme Court recently announce its intention to hear arguments in the Mississippi case, earlier this month it allowed a restrictive Texas abortion law to take effect.

While the landscape on abortion seemed settled when Jones ruled last year, "the ground began to shake" with the Texas ruling, University of Georgia law professor Ron Carlson said. The court did not rule on the constitutionality of that law, which also bans abortions once cardiac activity is detectable, but declined to block enforcement while a challenge to the law unfolds.

"That Texas ruling, it seems to me, is a straw in the wind that abortion laws are going to be freshly scrutinized by this Supreme Court," Carlson said.