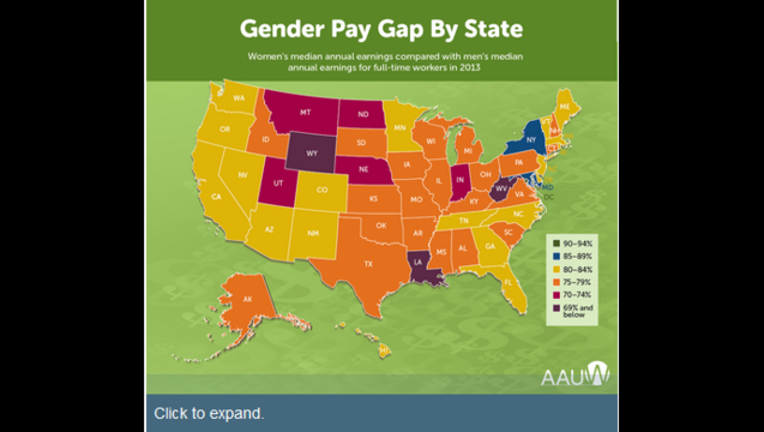 Atlanta - From office commissaries to presidential debate forums, the pay gap between men and women is recognized. But it's worse in some state than others. The complaint is that very often men make more money than women for doing the same job.

According to a woman's non-profit organization that collects jobs data, it's a gap that has remained about the same for a decade. The numbers haven't moved, despite more women entering the workforce and more women becoming the family's breadwinner.  At this rate the gap won't close for 124 years.

There are some places in the United States that do a better job than others at closing the pay gap.
But, the American Association of University Women finds that women working full time don't do well in Wyoming, West Virginia and Louisiana. There women make less than 69 percent of what a man makes.

But if you want equal pay for equal work - or as close as you can get - you need to live in Washington, D.C. where you can make 94 percent of what of a man makes. Maryland and New York are close with with 85-89 percent.

But that doesn't help us. We live in Georgia. Ladies, we sit in the middle of the pack, nationally. We make anywhere from 80 to 84 percent of what a man makes. We are in line with much of the country like Florida, California and Washington state.

Naturally questions arise: Are women less educated as we might stay home for a bit raising children? Do we get out of the job market and lose our footing?  Do we have more part-time jobs? Well, according to this women's gender research group, women face a pay gap in nearly every occupation even when education and job commitment are equal.

There is legislation pending to try to fix this imbalance. In New York and Illinois there are pay discrimination bills awaiting signatures from their governors. Massachusetts and California have several bills in the legislature.

But here's what you can do now - ask for more money. Women, reports show, aren't as aggressive as men about asking for what they're worth.