Deputy Police Chief Charles Hampton Jr. provides an update on an officer-involved shooting in Midtown. A man with a metal bar was striking cars and a person when the officer arrived on the scene.

ATLANTA - A spokesperson for the Georgia Bureau of Investigation said agents are at the scene of an officer-involved shooting on Sunday morning in Midtown Atlanta.

The Atlanta Police Department said a suspect has been hospitalized and went into surgery and remains unidentified. The suspect is in critical condition.

The officer did not suffer injuries and is no longer at the crime scene, police said. The officer's body camera was on, as well as security cameras at nearby buildings.

Police said the suspect was hospitalized and went into surgery. The officer was uninjured.

Deputy Chief Charles Hampton Jr. said an officer was flagged down at about 5:45 a.m. where a man was armed with a metal pipe, hitting cars and allegedly another person.

The officer left his patrol car and "had an encounter" with the suspect. Hampton Jr. said the officer's stun gun was ineffective, so the officer fired his weapon multiple times. 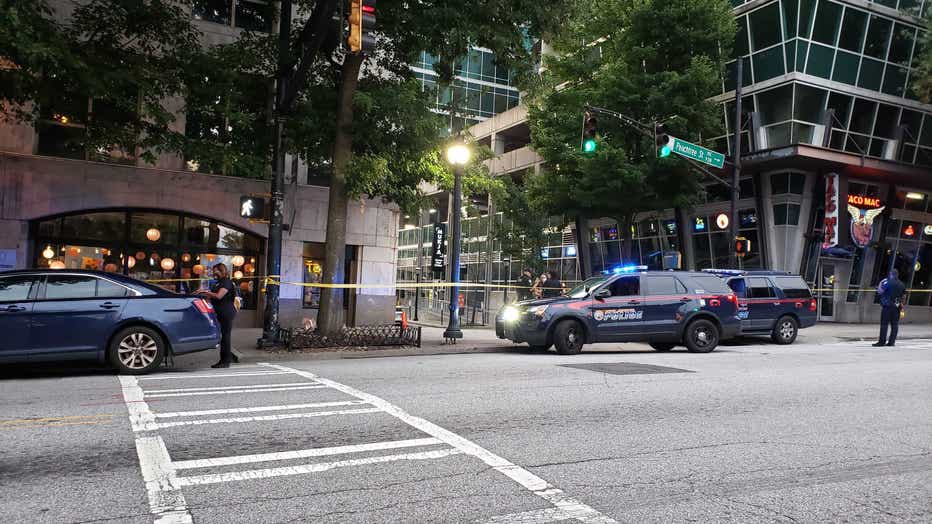 The person hit by the pipe was treated at Grady Memorial Hospital after the fire department treated them at the scene.

Right now, police don't know what caused the man to terrorize locals with the metal bar.

"The homicide team will look into the activities of the individual — what led up to arming himself with the metal pipe," Hampton said.

FOX 5 Atlanta's Lindsay Tuman was at the crime scene and said police were walking the scene during the preliminary investigation.

A stun gun was laying was the street next to a pair of white shoes.

Charges against the pipe-wielding suspect are still pending.