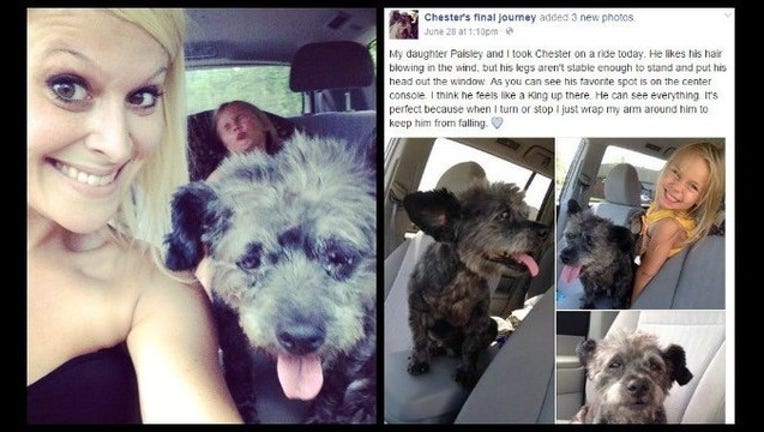 UPDATE: Chester has passed. His adoptive mom, Nicole Elliot wrote this on his Facebook page just an hour ago:

"I have written and erased this post several times, because I feel like once it's up it makes it feel so final. I am so sad to tell everyone that my sweet baby Chester has left this world. I am heartbroken, but at the same time I wouldn't have wanted it any other way. I held him until his last breath and then some. I told him it was ok to let go, and how loved he was. I know without a doubt Chester died knowing that he mattered. He knew love. Even though my heart hurts now, the pain is eased by the legacy this sweet boy is leaving behind. He has inspired, and brought together so many people. He showed people how amazing he was despite his age, or the horrible illness he had. He is now pain free and running around with all of your babies that have gone before him. Chester's journey with us was too short lived, but his presence with us will never be forgotten. Thank you all for loving him. He will always hold a special place in my heart." - Nicole Elliot

A Georgia woman has decided to do something amazing for a dying dog.

Nicole Elliot recently came across a post about a dog named Chester in need of a hospice for his remaining days.

According to the Facebook page Elliot created for Chester called “Chester’s Final Journey” the pup was saved from deathrow at the pound in Columbus by Animal Ark Rescue in April. Elliot said he was in bad shape and had surgery to remove some tumors, but more tumors showed up soon after. Chester currently has many cancerous lumps all over and is also heart worm positive.

Elliot considered fostering Chester for a while, she said on Facebook.

“I decided it would be an amazing experience to take on. It will be so tough to lose him shortly, so I decided to take the time he has left (which is undetermined, but not guessed to be very long,) and make it as happy as I can,” said Elliot.

His new mom hopes to make his final days the best they possibly can be.

“I am wanting to do a sort of bucket list for Sweet Chester and give him and awesome final ride,” said Elliot at the end of last month. “I am open to suggestions and ideas.”

Elliot is letting the world follow Chester’s journey by posting pictures and updates on the Facebook page, which has more than 46,000 likes.

On Tuesday,Chester stayed at home but starred in a photoshoot.

"Thank you so much Charla Hedden-Setelin! Thank you for your support, kindness, and love! The pictures are beauitiful! I know they will help me hold the memories forever," said Elliot.

He was groggy following the 'photoshoot' and relaxed afterward.

Monday was a little rough for the dog and Elliot said she had to take him to the vet.

“Chester seemed to really like it. When I lowered him into the water he started doing the swimming motions with his legs, so I think he may have been swimming before,” she said on Facebook.

On Thursday morning, Elliot said the Facebook page had only 340 likes and by Thursday night it had nearly 1,000. Since then, thousands more have liked it and want to follow Chester’s journey.

“I want everyone to know how thankful I am to see all of this love and support! I am trying to respond to all of the posts the best I can. If I have missed any just know I am grateful for you all, and thank you for sharing this journey with us!”

On Saturday, the 4th of July, Elliot announced Chester’s journey could also be viewed on Instagram.

Elliot said many people have reached out to her wanting to help by donating. She said none of what she’s doing would be possible without Animal Ark Rescue and suggested anyone who would like to contribute can do so by clicking here.

“If you wish to help with Chester's past present and future, and other animals like him, this is how to do so! Your help will allow this rescue to continue to take in dogs JUST LIKE CHESTER!!”