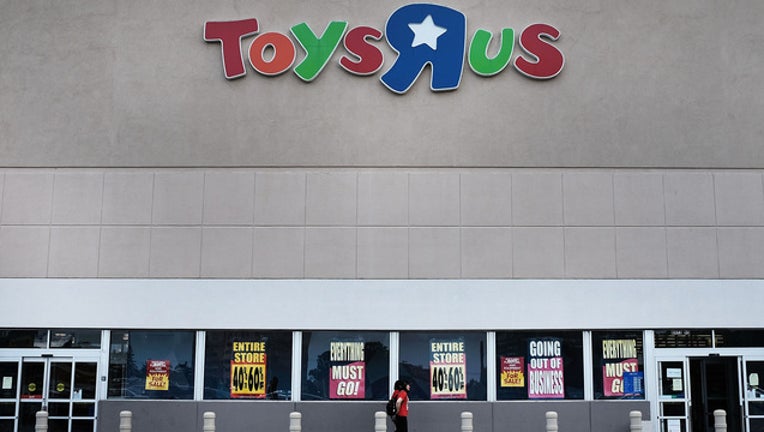 NEW YORK (AP) - Two private equity owners of the iconic Toys R Us toy chain have set up a $20 million hardship fund for the thousands of former workers left jobless and without severance after the chain was liquidated in June.

KKR and Bain Capital announced Tuesday the creation of the fund aimed at helping the 30,000 workers affected by the store closures, a move that followed efforts by worker-backed groups. The fund wasn't legally required, and the groups call it an "unprecedented" step toward helping families caught up in the store closures and bankruptcies that have roiled the fast-changing retail industry.

Workers are pushing to get an additional $55 million they believe they're owed and are looking to other firms that had a stake in Toys R Us and that they believed played a role in the chain's demise.

"This is an amazing first step, but the goal is to keep the pressure on," said Ann Marie Reinhart, 59, of Durham, North Carolina, who worked at Toys R Us for 29 years, most recently as a store supervisor. She said she hasn't been able to find work that pays health insurance since she was laid off early this past summer.

While the iconic toy retailer was liquidating its hundreds of stores in June, workers were informed they would not get severance. They began protesting outside the New York offices of the retailer's former owners KKR, Bain and Vornado Realty Trust, firms that loaded the company with debt, helping push it into bankruptcy in the fall of 2017.

Then, they showed up at more than a dozen pension meetings around the country over the last few months, exerting pressure on them to push the equity owners they invest in to do right by workers and act more responsibly.

Since late summer, Toys R Us workers have been pressuring pension funds to in turn push a group of hedge firms that owned the retailer's secured debt in a bid to get the remaining money they say is owed to them. These so-called secured creditors, including Solus Alternative Asset Management and Angelo Gordon, were the ones that ultimately pushed for the liquidation as they looked to get returns for their investors.

The groups that organized the Toys R Us workers -- Organization United for Respect, along with Private Equity Stakeholder Project and the Center for Popular Democracy -- say that the hardship fund is being structured to allow the other firms to contribute, paving the way for Solus, Vornado and others to contribute.

KKR and Bain said the fund was established in response to the "extraordinary set of circumstances" that led to Toys R Us being shuttered.

"The confluence of the disruption in retail, the push by the company's secured creditors to liquidate the company's U.S. operations, and the fact that we have never experienced something like this in the history of either firm, led us to try and find a way to provide some financial relief for former employees," the two firms said in a joint statement.

The fund is administered by independent third party administrators, Kenneth Feinberg and Camille Biros, experts in designing and administering unique compensation programs such as the 9/11 fund and the BP oil spill fund. They'll serve as independent administrators of the fund, responsible for the independent management and distribution of all proceeds.