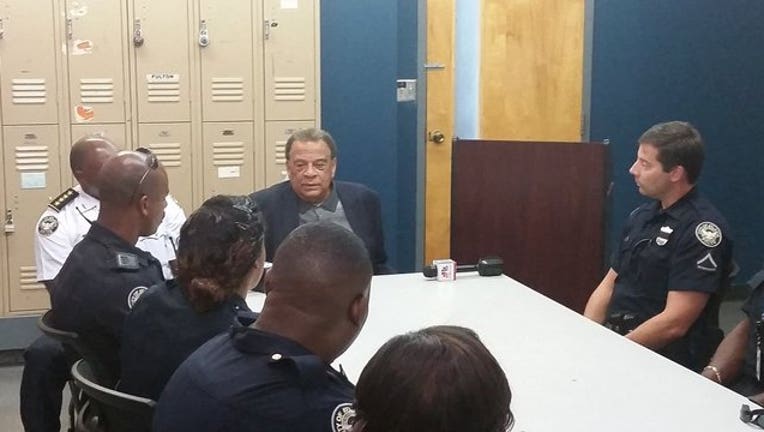 ATLANTA - Atlanta Police Chief George Turner and former Atlanta Mayor Andrew Young sat down Sunday to discuss the city’s response to the protests in the city over the past few days.

Former United Nations Ambassador and Atlanta Mayor Andrew Young agreed and offered Chief Turner this advice in the midst of the protests.

“Well, I sent him a text the other night and I said ‘Good job, be strong, stay strong, and stay cool’ and that’s all you can do. Don’t let anybody get you upset,” said Young.

“The fact is the people that we are bringing in to this work, we are, we really are doing our very best to put the best and brightest people on the streets who understand the goals and the methods and also our mission and what we are trying to push out in the streets of Atlanta,” said Turner.

The recent concerns over the city’s available police force on the streets also came up during the conversation.

“I won’t get into numbers. I will just simply say to you that we have every available officer that we can get prepared on multiple different levels so that we can allow our citizens and folks to demonstrate peacefully,” said Turner.

“I would be remiss if I didn't acknowledge and thank the Georgia State Patrol. They have a huge number of officers that are online with us and they are doing a phenomenal job. We have our joint operations center operating now, a number of local agencies that are in that center operating along with us as well as our state and federal partners,” said Turner.

Young, a notable civil rights icon, did express his concerns over the protests.

“Really, I think protests should be toward a purpose and I would like them to sit down this afternoon and have a meeting and decide what is it that they want from the city of Atlanta, from their schools from the police forces, or any of the elders that are left around, and it worries me that you have to have targets to be successful see and you don't just protest for the sake of protesting. You can always have something to protest about but the reason we've succeeded is we knew what we wanted and when we go that we could stop protesting and then think of something else we needed. I'm not saying protest is wrong, but purposeful protest is better,” said Young.