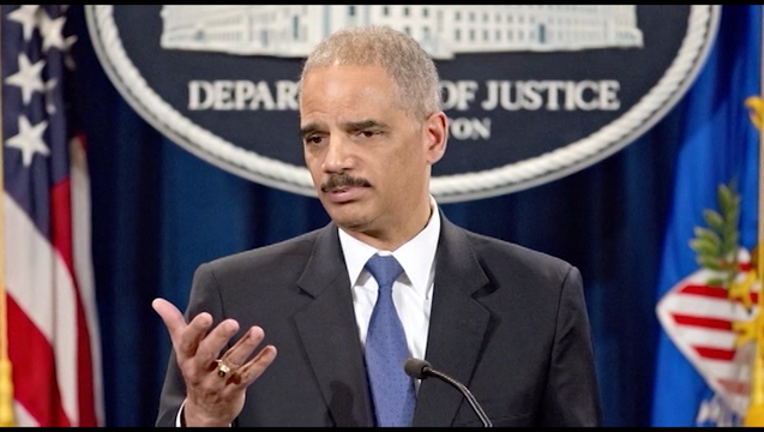 It's the first time Holder has weighed in on a state redistricting fight since he launched a national political organization intended to help Democrats in upcoming redistricting battles.

In a statement to The Associated Press, Holder says Republicans who control the Georgia House are practicing "political map-rigging at its worst" with a plan to move black voters out of certain swing districts in metro Atlanta.

"Voters should choose their elected representatives, not the other way around," Holder said of the proposal, which House Republicans adopted earlier this month on a party line vote.

The new district boundaries, which are now pending in the state Senate, would make it harder for Democratic challengers to defeat Republican incumbents.

The Georgia wrangle and Holder's response preview the former attorney general's strategy ahead of the 2020 census and subsequent legislative sessions where state lawmakers will redraw district boundaries that heavily influence the partisan makeup of Congress and state assemblies.

Georgia's General Assembly has state constitutional authority to redraw district boundaries "as necessary," though it's typically done after each decennial census, not late in a decade as Republicans are attempting now.

A spokeswoman for Deal said the governor does not comment on pending legislation.

The chairman of the state Senate's redistricting panel pointed to the longstanding tradition that each chamber allows the other to draw its own maps without interference; that effectively renders any upcoming Senate votes a formality.

"We don't alter theirs, and they don't alter ours," said Savannah Republican Ben Watson, who added that senators also are considering changes to their districts.

Nationally, Republicans were tremendously successful in the 2010 midterm elections, consolidating power in statehouses across the country. GOP majorities used that power to redraw congressional and legislative maps that in many states maximized the influence of conservative voters.

Essentially, the idea for a legislative majority is to concentrate opposition voters in as few districts as possible. The pending Georgia changes, for example, would move some heavily African-American precincts from GOP-held districts and into a district already occupied by a Democrat. Black voters overwhelmingly support Democrats.

The affected Republican incumbents have watched their winning margins drop as low as 51 and 53 percent in recent elections, so the GOP plan offers them insurance by shifting Democratic voters out of their districts.

Those kinds of maneuvers, panned by critics as partisan and racial gerrymandering, help explain how a state like North Carolina is a presidential battleground with a Democratic governor, yet has a U.S. House delegation of 10 Republicans and three Democrats and a state Legislature where the GOP began the year with a 74-46 majority in the House and a 35-15 majority in the Senate.

In Georgia, President Donald Trump won the state by 5 percentage points, while Deal won 2014 re-election by 8 points. But the U.S. House delegation is tilted 9-4 to the GOP, with one vacancy, while the GOP started the current year with a 118-62 majority in the state House and a 38-18 advantage in the state Senate.

Democrats also draw districts to their advantage, and activists in some states, separate from Holder's effort, are calling for bipartisan and independent commissions to take over redistricting power from partisan legislatures.

Georgia Republicans note that Democrats in the state, before they lost much of their power in 2002, drew district maps that courts ultimately threw out.

Now that it's Georgia Republicans redrawing lines, the input from a high-profile Democrat like Holder is unlikely to hold much sway. But Holder describes his overall effort as necessary to protect voting rights and the integrity of the political system.

His nascent group is the National Democratic Redistricting Committee, which he will use to advocate for what Democrats describe as fairer district boundaries. Former President Barack Obama is raising money for the organization.