ATLANTA - A Tropical Storm Watch has been issued for portions of north Georgia from 5 p.m. Wednesday through 11 a.m. Thursday, as the combination of wind and rain is expected to impact north Georgia. 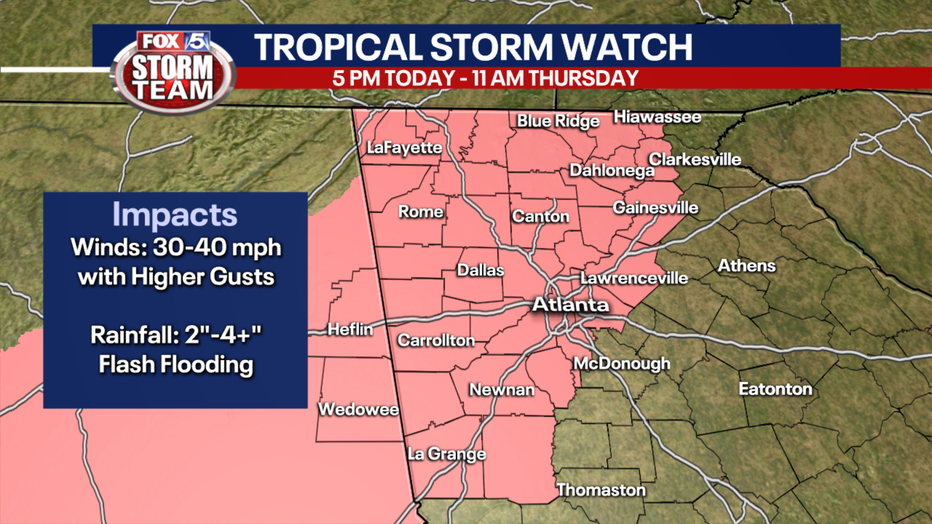 The FOX 5 Storm Team says Zeta will mostly be a rain event with the biggest threat being flooding. About 2 to 4 inches of rain is expected with the storm with localized amounts upwards to 6 inches. That rain will quickly accumulate, swelling rivers, creeks, and other low-lying areas. It will also prevent continued hazards for drivers.

Wind will be a factor with the potential for winds to be between 39 and 57 mph. And a localized spin-up tornado cannot be ruled out, even though the chance is low.

Tropical Storm Zeta made landfall Monday night on the Yucatan peninsula as a category one hurricane. 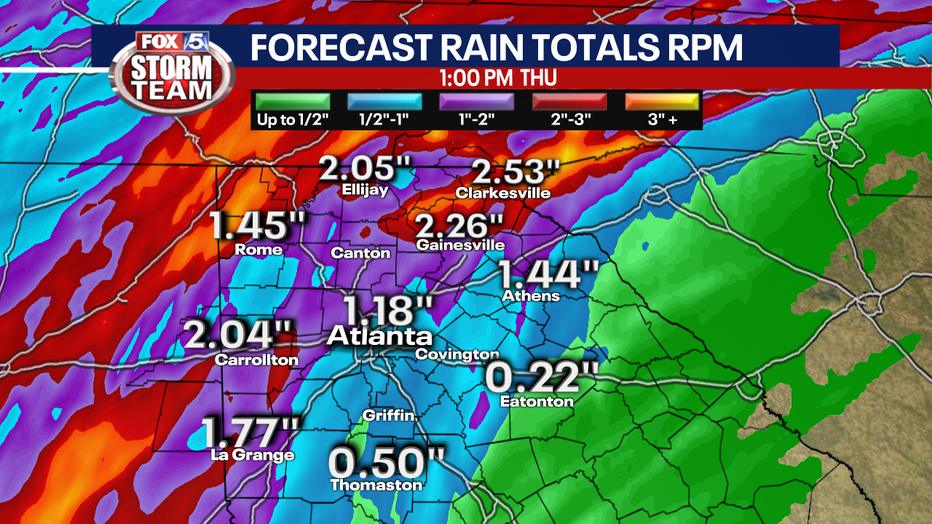 As of 5 a.m. Wednesday, Zeta is strengthening. Zeta is a category 1 hurricane with maximum sustained winds of 85 mph, moving north-northwest at 17 mph. It is about 320 miles south-southwest of the mouth of the Mississippi River. The tropical-storm-force winds extend 140 miles from the center of circulation.

After an expected second landfall along the Louisiana and Mississippi coast late Wednesday, the biggest impacts for North Georgia will happen Thursday morning.

A Hurricane Warning is in effect for Morgan City, Louisiana to the Mississippi/Alabama border and Lake Pontchartrain, Lake Maurepas, and Metropolitan New Orleans.

A Tropical Storm Warning is in effect for Mississippi/Alabama border to Okaloosa/Walton County Line Florida. 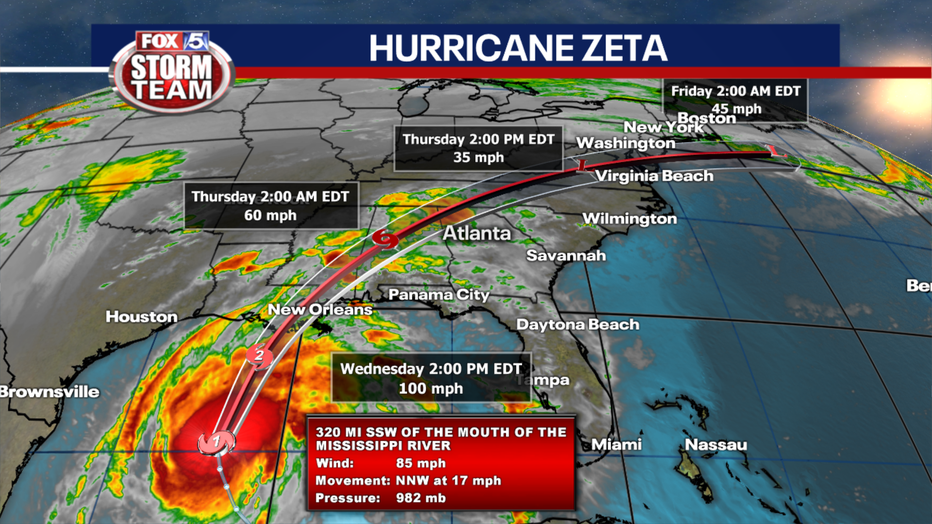 The Gulf Coast, already pummeled by two storms, will be bracing for another storm. The forecast track has this one closer to the Louisiana Delta, but the track could change over the next couple of days.

North Georgia will begin to feel the impact of Zeta starting Wednesday, as bands of showers and thunderstorms begin to move through. 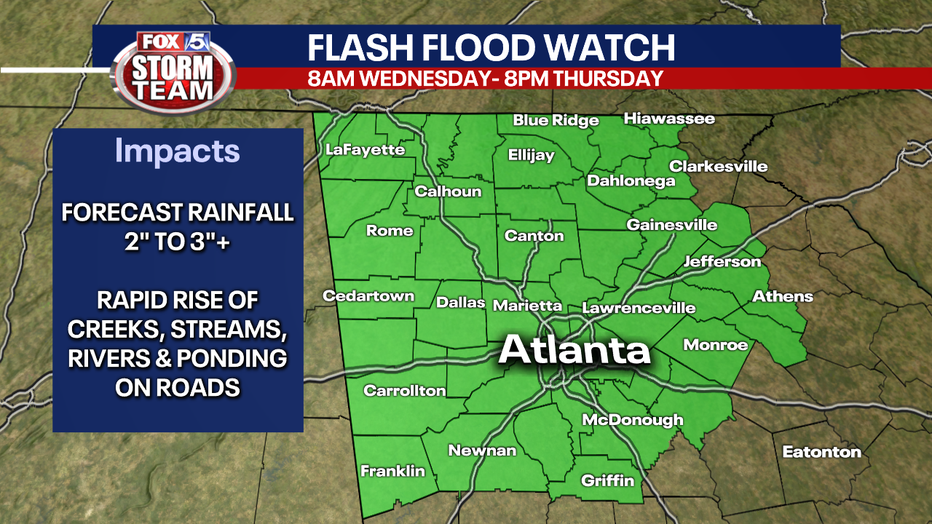 In addition to copious amounts of rain, winds will increase Thursday morning. With gusts over 40 mph at times and saturated ground, we could have issues with downed trees and power lines. Additionally, the risk of any weak, spin-up tornado is low, but it is not zero. 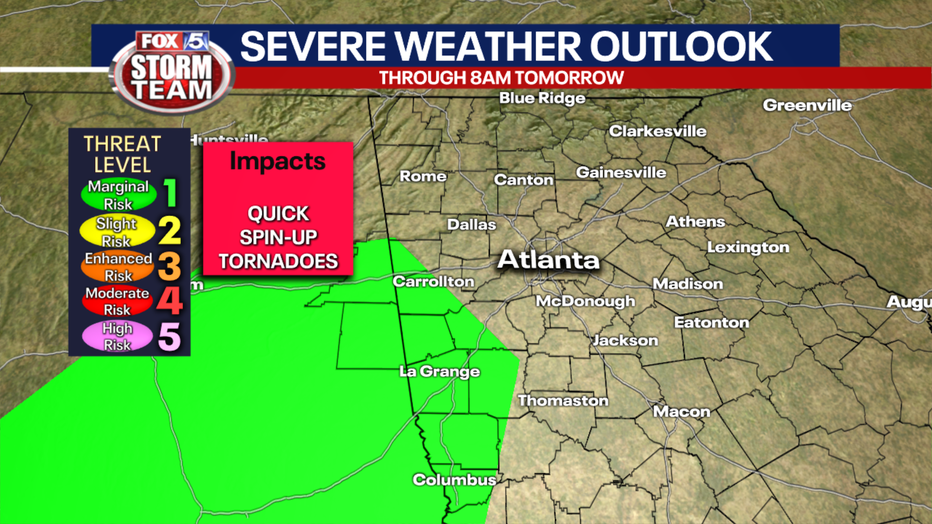 The timing and rainfall amount could change over the next couple of days and depends on the path Zeta takes. The FOX 5 Storm Team will continue to monitor Zeta and will update this forecast with the very latest.