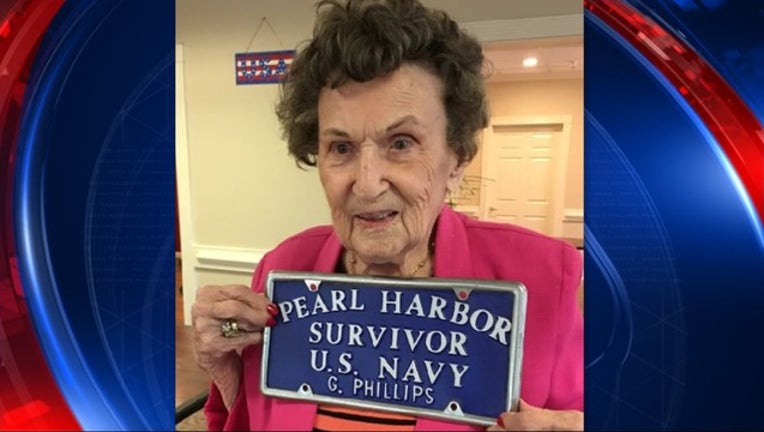 DUNWOODY, Ga. (FOX 5 Atlanta) - A Dunwoody woman who survived the 1941 attack on Pearl Harbor will celebrate a milestone birthday on Wednesday.

The Dogwood Forest of Dunwoody Assisted Living Community will hold a birthday party Wednesday afternoon for Garrie Phillips as she celebrates her 100th birthday.

Her life story includes witnessing and surviving the "Day of Infamy" as described by President Franklin Roosevelt, the Japanese attack on Pearl Harbor on Dec. 7, 1941 that entered the United States into World War II.

Two months after their wedding, Crayton, who served in the Navy, was assigned by the Navy to Pearl Harbor for a mine sweep. Soon afterward, Ms. Garrie moved to Hawaii to be with her husband.

On the morning of the attack, Tom was on duty with his wife alone in their apartment.

When she heard the bombing, Garrie ran outside and saw the Japanese aircraft surrounding U.S. ships.

On December 8, Garrie heard the announcement from President Roosevelt that the U.S. had declared war against Japan.

Garrie and Tom had a daughter together. Tom later died in Pearl Harbor while serving in the Navy.

Ms. Garrie remarried and had a son with her second husband. Her extended family includes two grandchildren and four great-grandchildren.

After spending most of her life in Pensacola, Ms. Garrie moved to Dunwoody two years ago to be closer to her daughter.